Let’s START being surprised at antisemitism

Craig  reminded me that Nabila’s infamous antisemitic Tweet, mentioned in this piece on Harry’s Place yesterday, was the very same one we highlighted here  last October.

We did wonder why that particular Tweet was cited now; it’s not breaking news or anything. Then I realised that it was just a bit of background to contextualise an article about Cologne that Ramdani penned the other day for the Independent
Nabila thinks you need to know that :

“Brown men are not inherently more misogynistic or brutal than white men, and Muslims are just as likely to be family-orientated, peaceful citizens as their counterparts from other religious and cultural heritages. Neo-Nazi groups such as Germany’s Pegida – an organisation becoming increasingly active in Britain – instead jump on the propaganda, using sacred half-truths about Cologne to spread hatred and violence.”

There. Now you know. Oh yes, and you also need to heed this warning:

“The refugee-as-rapist construct is the kind that has been used to demonise people throughout history. The idea is that you apply frightening characteristics to those you view as political enemies. In the 1930s Cologne’s Jews were described as 'Untermenschen' (inferior people) menacing European culture, before 11,000 were murdered during the Nazi Holocaust by “racially pure” Aryans, many of them beer-swilling Christians.”

“See what demonising innocent people leads to” she seems to be suggesting, menacingly. Don’t you just admire the way Nabila forgets her own words 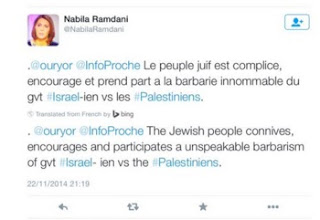 and, while she’s at it, she’s simultaneously perpetrating the “Muslims are the new Jews” meme, an analogy which is both grossly hypocritical and false.

Currently, the increasingly overt antisemitism in universities is in the spotlight, with a notable resignation and a cancelled engagement.

Let me quote from a comment by Judy113, below the line of this piece : Let’s stop being surprised by antisemitism, again, on Harrys Place.

“What this article is silent about is the way in which antisemitism, under the cloak of anti-zionism, has been institutionalised on the left since the days when Ken Livingstone was Mayor of London.

When he regularly made antisemitic criticisms of Israel or made pointed Jew-baiting sneers at Jews, the Labour leadership sat on its hands and/or said, "Oh, just Ken."But I also heard people high up in the Labour Party say they had many seats in marginals in constituencies with large Muslim electorates. So that meant it was inconvenient to do anything about antisemitism in the party.

[...]For years, Labour has been happy to have very senior MPs and Shadow and former junior ministers go off to Gaza to shake the hands of the leaders of the terrorist and violently antisemitic Hamas organisation; Labour's current leader has been their friend for decades.

And that's without even mentioning the virulent demonisation and hatred of Israel that pours out of the trade union movement-- and inflicts itself on any union members foolhardy enough to challenge the hard left hatred line.The Green and Liberal Parties and the SNP are the same. Though there are anti-Semites in the Tory Party and UKIP, they do not embrace this demonisation and hatred incitement.”

So now  I’m getting to the point. The virtually unconditional support for the Labour party - or at least for the Labour party B.J.C. TM - from 99% of the BBC tells us that this particular ‘institutionalised attitude of the left’ is the BBC’s default attitude.
It also explains why the BBC allows antisemites such as Nabila Ramdani to opine (as experts) on programmes like Dateline, and no-one turns a hair.
Another btl comment, by ‘wildcolonialboy - this time on the H.P. Nabila thread mentioned at the top of this piece:

I pointed out her anti-semitism on Twitter, she immediately blocked me.

I'm complaining to the BBC and Guardian about her anti-semitism, hopefully ensure this racist doesn't get further commissions”

Sadly, the default response that comes to my mind is: ‘good luck with that’ ... as they say on the internet.
Posted by sue at 13:51