A Storm of Complaints 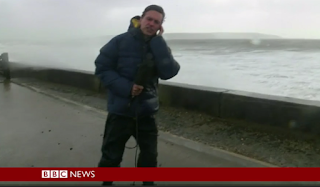 This week's Newswatch (with Samira Ahmed) did a bit of 'on the one hand' and 'on the other hand' vis-à-vis 'complaints from both sides' over the BBC's coverage of the junior doctors' strike...

...but the bulk of the programme was taken up with discussing BBC reporters 'braving' the "extreme weather" - specifically a live report from the seaside on BBC One's News at One where experienced BBC reporter Duncan Kennedy stood next to the sea fighting against a heavy buffeting from the wind and sea-spray during Storm Imogen whilst at the very same time telling BBC viewers that the authorities had warned people to "batten down the hatches" and "don't come out and fight it".

Viewers had written in saying that the BBC reporter looked as if he was in danger (even if he wasn't) and that the BBC was countering the official message by seeming to behave so recklessly.

Now, this may not strike you as being quite the burning issue these viewers felt it to be but Samira's interview with Richard Burgess, UK News Editor for BBC News is well worth watching nonetheless. 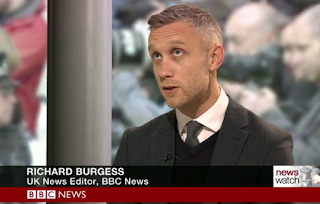 The BBC editor was rather woeful I felt, endlessly repeating himself and failing to properly get to grips with some of the points being put to him by Samira Ahmed.

It was something of a car crash.

Samira herself didn't seem overly impressed either by his apparent inability to fully understand and answer her questions.


Oh, and if you were wondering, Mr Burgess of the BBC felt that the BBC had got it about right.
Posted by Craig at 12:16