Another snapshot: Naga does the splits 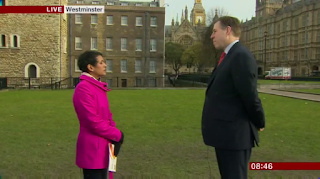 Just watching BBC Breakfast between 8 and 9 o'clock this morning. Here's a snapshot of what I saw.

Naga Munchetty was talking to two Labour MPs on opposite sides of the EU debate - Ben Bradshaw and Kate Hoey. Her questions focused overwhelmingly on splits in the Labour Party and splits within the pro-Leave camp.

Then came an interview about the death of Harper Lee. Guess who was invited for interview? Shami Chakrabarti of course. It was To Kill a Mockingbird that inspired our Shami to become a lawyer, naturally.

Then came the paper review with politics lecturer, Dr Victoria Honeyman, beginning with the newspapers' coverage of the EU deal. Dr Honeyman, who kept using the terms 'anti-European' and 'pro-European', commented that the 'anti-European' newspapers were doing what you'd expect them to do ("really going for it"), though the broadsheets are being "a little more restrained". \Call me 'someone who jumps to conclusions' but I think I can guess how she might be voting in the EU referendum.

Naga returned later with the Conservative MP Graham Brady. You won't be surprised that "divisions"  and "splits" within the Conservative were Naga's overriding concern here. "And to come back to the party's splits question", she said at one point, having moved away from it for a question.

I think I can see where this is going: months and months of BBC reporters and interviewers banging on about party splits, divisions, more splits, personalities, more divisions, political gossip and splits again.
Posted by Craig at 09:17