The respectful pause between the announcement of the passing of U.S. Supreme Court Justice Antonin Scalia and politicians and pundits' politicking over what his death means for the balance of power in the Supreme Court appears to have lasted all of a few minutes.

Hillary and Bernie on one side and Donald and Ted on the other side have all, within hours, been making calls favouring their own side's control of the Supreme Court.

Some might call it a bit unseemly...though who they think is being unseemly appears to depend on their own politics.

Will 'the usual suspects' at the BBC betray selective 'outrage'? Well, stalwart BBC twitterer Julia MacFarlane has already got the ball rolling: 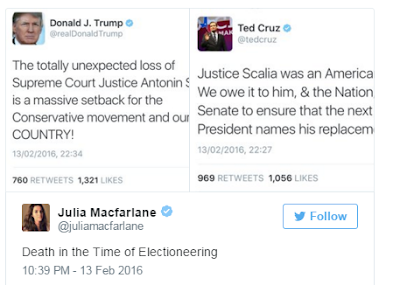