This post might have but a tenuous link to the core purpose of this blog, but we reserve the right to go off-piste if we’re sufficiently  piste off. 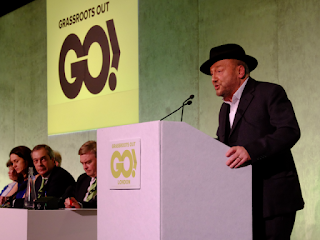 "Bringing in the RESPECT Party helps Grassroots Out’s chance of getting the official designation for the referendum. Because those who check with the Electoral Commission would know that you could have every Cabinet Minister under the sun backing you, but it wouldn’t help with the “cross party” requirement. This is where the establishment Vote Leave are failing. And indeed it is a problem of their making."

That is Raheem Kassam’s argument for holding your nose and tolerating George Galloway’s inclusion in the Grassroots “Go” campaign.

I’ve had a look at this and I haven’t found a ruling that says the ‘cross party requirement’ needs to include the Respect party. Surely it’s already cross-party enough. Labour, UKip, Conservative, monster raving loony - who else do they need?

Even if  Nigel Farage was thinking long-term, and merely gritting his teeth and tolerating Galloway “for the good of the country,” he has undoubtedly sabotaged the reputation of UKIP.  In fact he’s forfeited it altogether.
I understood there was a hard-fought struggle within UKip’s ranks  to weed out racists and antisemites.
The EDL failed to win the battle against its hooligan-riddled image, but UKip almost succeeded in ridding itself of its racist image, and distancing itself from all those murky comparisons with the BNP and the NF.

By tolerating Galloway’s support of Islamic extremists and antisemites, even if he’s been cunning enough not to be caught expressing outright antisemitism himself by always carefully couching it in criticism of Israel or hiding it behind other indirect slurs - Nigel Farage has foregone all the potential UKip might once have had to be taken seriously as a credible and honourable political party.

Since the “Out” campaign is already fragmented, why couldn’t Galloway muster all those followers of his whose vast numbers are supposedly vital to bolster the Grassroots movement, and set up his own Islam-friendly ‘Out’ campaign.

Giving Galloway a platform was totally unnecessary. A gross lapse of judgment. He was okay as he was - marginalised and ridiculous. Now look. Rejuvenated, rehabilitated and as poisonous as ever.

At the moment the Out campaign  could hardly be more vulnerable to the BBC’s obsession with schisms.  Why add another divisive element into the mix?

Galloway’s Islamophillic politics are precisely what many of the Out campaigners are afraid of. The mass Muslim immigration that Galloway encourages hardly typifies most people’s vision of a better Britain. Or any kind of Britain at all.

I am disappointed now. I was leaning out, but now I’m seriously wavering.
Posted by sue at 12:20