I bet you could have guessed it was Shirley Williams!

(Note to self: Too many exclamation marks = not good!!!) 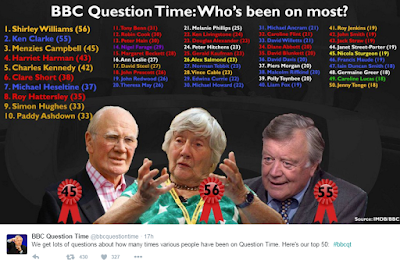 It was prudent of BBC Question Time to publish the top 50 rather than the top 10, wasn't it? The top 10 alone would have made the programme appear astonishingly pro-EU - especially given the fact that half of the top spots went to Liberal Democrats and that the two most-invited-on Tories are Ken Clarke and Michael Heseltine!

P.S. If you're having trouble sleeping I heartily recommended Shirley's mum's very long, very boring book - referred to, at my school, as 'The Vera'.

Only my feminist teacher and one feminist pupil liked it.

The mere thought of it now makes me feel very, very, very drowsy and...

...to let you into a very revealing secret which I've never told anyone before and which I feel a blog is the right place to unburden myself at...