Was Edward Stourton "hunting for salaciousness"? 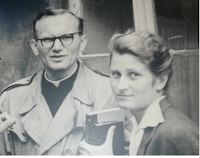 I think it's media hype, and I think the BBC
- which was once the model for journalistic rectitude -
has damaged its own reputation by getting into this.
(George Weigel, Sunday)

Tomorrow night's Panorama, with its somewhat tabloid-sounding title, The Secret Letters of Pope John II, has certainly been getting a fair bit of advanced publicity.

The papers have all reported it, and Radio 4's Sunday also gave it a plug this morning.

More than ten years after his death Pope John Paul II continues to fascinate historians, and everyone else it seems - not least because of his very public political role in global affairs. But behind every public figure, even one who was eventually - indeed speedily - canonised, there is a private life. A BBC Panorama investigation to be aired tomorrow night will explore what are being described as "intimate aspects on John Paul's emotional life", as revealed in recently discovered letters between the late pope and some of his close female friends. According to some reports this weekend unnamed Vatican sources have already pre-emptively responded to the film, dismissing it as "more smoke than fire". I've been talking to the papal biographer George Weigel.

What William didn't mention was that this Panorama report is the work of his colleague, Sunday's main presenter, Edward Stourton - thus making it an even more incestuous plug on Sunday's part!

Still, it has to be said that what followed didn't turn out as might have been expected, and it was probably a good thing that William Crawley was in the chair today rather than Ed Stourton as the latter might well have exploded with either embarrassment or anger (or both) at what Mr Weigel had to say about the quality of his reporting!

I will transcribe the whole thing, as it's quite interesting in its own right, posing interesting questions about privacy and reporting standards:

George Weigel: I don't think it is a story. It's been perfectly clear through my biographical work and others that John Paul II, Karol Wojtyla, had friendships with women throughout his life - from his childhood to his death. He was certainly a friend of Anna-Teresa Tymieniecka. She has denied that there was any romance involved. There was certainly no romance between John Paul II, Karol Wojtyla, and Wanda Poltawska. This is all much ado about nothing, if I may borrow from Britain's national poet.

William Crawley: We know something of the nature of the friendship between Wanda Poltawska and John Paul II because she did publish a volume of her letters in the past, and that caused something of a storm at the Vatican at the time.

William Crawley: So, what we now have in addition to the Poltawska correspondence is what appears to be a treasure trove - as it's been described by some of the media - of correspondence between John Paul II and Anna-Teresa Tymieniecka, which may reveal their mutually affectionate relationship. Let's not put it more strongly than that.

George Weigel: They were friends!! I don't know why this constitutes 'a treasure trove'. It only constitutes 'a treasure trove' if you're hunting for salaciousness, and there's none of it to be found. I think it's media hype, and I think the BBC - which was once the model for journalistic rectitude - has damaged its own reputation by getting into this.

William Crawley: John Paul II was such a powerfully important figure in the 20th Century. Isn't it relevant, isn't it significant, isn't it important that we know more about his emotional life, and it's an appropriate investigation?

George Weigel: I'm sorry, I wrote two volumes totalling 1,500 pages on John Paul II called Witness to Hope and The End of the Beginning. It revealed far more about his emotional life than is going to be revealed on Monday night, and will be revealed in these letters. So, no. I think this is much ado about nothing.

William Crawley: If you'd had access to Anna-Teresa Tymieniecka's letters when you were writing that volume would you have included reference to them?

George Weigel: I have included references in the books to correspondence with women that John Paul II shared with me from his days as a young priest in Krakow. That was with the permission of both parties, and I would have applied the same standard to any other correspondence.

William Crawley: I just say in response to that though: by the policy you adopted - including private documentation. private correspondence - if there was something very significant and revealing in any private letters which challenged the historical account of John Paul II's life, you wouldn't publish it, because you didn't have his permission in advance to do so?

George Weigel: I think public figures have a right to their privacy. There is nothing in anything I have ever seen that suggests that there was a contradiction between what John Paul II taught and what he lived and, therefore, I'm completely at ease with the rules I adopted in writing my own two-volume biography of the Pope.