Not (necessarily) getting it about right 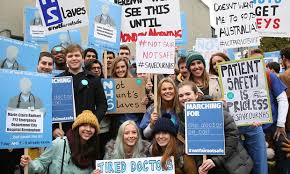 Meirion Jones's citing of a couple of examples of apparently pro-Tory bias in the BBC's coverage of the junior doctors' strike reminds me that Radio 4's Feedback also covered the story - especially how it was reported on Today.

The complaints cited by Roger Bolton weren't, however, just from critics of the government. Critics of the BMA also accused the BBC of bias. Ergo: complaints from both sides!

We often joke about BBC editors going on programmes like Feedback and Newswatch and trotting out their old, favourite, tired and easily-debunked argument, "We get complaints from both sides. Therefore, we must be getting it about right", to any complaint about BBC bias.

Do BBC editors really still say that though?

Well, yes. It's just that they now tend to sound quite a bit more sheepish about it, and have to hedge their uses of it with caveats and additional appeals to trust

Today editor Jamie Angus gave us a particular fine example of this upgraded BBC defence tactic on Feedback in reply to that criticism of his programme's coverage of the junior doctors' strike:

It's a bit glib in a way to say if both sides are complaining volubly then we're just about in the right place but I do sometimes fall back on that.....Genuinely, my perception is that I'm getting a pretty balanced mailbag.

BBC editors know that - hence the "It's a bit glib in a way to say" bit of his statement - but it won't stop them using it. They know it sounds superficially plausible.
Posted by Craig at 09:33