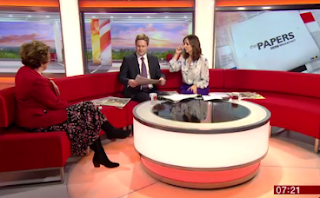 BBC Breakfast, unusually for them, has a former Conservative MP reviewing the papers this morning - namely Edwina Currie.

Now, Edwina was very up front about the fact that she's strongly pro-In vis-à-vis the EU referendum. She made that clear from her opening words (which was especially helpful as neither of the BBC presenters had previously seen fit to mention the fact).

This was presenter Christian Fraser's first question to her this morning, straight after the run-through of the front pages:

I spoke to someone from the Czech government last week. He was very worried about Brexit. They think it's going to unleash all sorts of problems across Europe - largely the rise of the far-right in Europe. Iain Duncan Smith's wrote a piece in the Telegraph today and you picked this out.

Now, on reading IDS's piece, I'm still none the wiser as to why Christian Fraser chucked in that anti-Brexit point at the start of the paper review with pro-Remain Mrs Currie. It seemed particularly gratuitous to me. Did he just want to get it off his chest?
Posted by Craig at 07:45