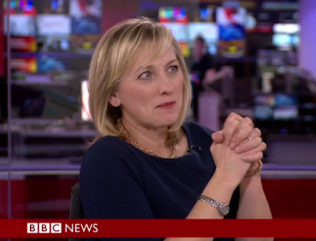 I was just reading Biased BBC and saw a comment there saying that BBC News Channel presenter Martine Croxall had made an extraordinary biased statement during one of Friday night;s paper reviews:

BBC News 24 couple of nights ago: Vacant-looking Martine Croxall reviewing the papers with 2 achingly left-wing commentators. Comes to the story about the ECJ forbidding the UK from deporting Abu Hamza’s daughter-in-law for terrorist activities due to her ‘right to a family life’.  Martine opines: “That’s why we need the ECJ, to tell us what do do in cases like this”. Her two comrades nod sagely. FFS!

I have to confess that I thought the commenter must have misheard because Martine Croxall isn't stupid enough to say something quite as biased as that. So I watched it myself, as you can do from 10:12 here (for a while).

The conversation went on much as Chilli at Biased BBC described, with Martine chucking in the odd comment, such as "It comes down to that idea that you can pick and choose who you allow to have human rights. And I don't think the law allows that", until, replying to what James Millar of The Sunday Post had said about the European Court of Justice, Martine said (beginning at 12:17):

Well, that's why we have it, isn't it? To tell us what we should be doing in this country, to keep...checks and balances so that everyone has the laws applied to them.

And then, with her guests nodding their agreement, she moved straight on to the next story, in the Guardian.

Wonder how the BBC Complaints Department will explain this one?
Posted by Craig at 15:00