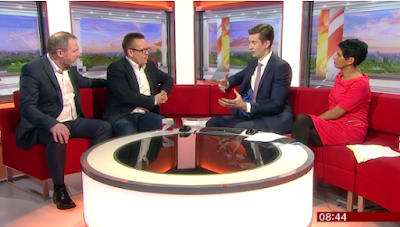 BBC Breakfast interviewed a couple of businessmen from small-and-medium-sized enterprises (SMEs) about the EU referendum - one a Leave supporter, the other a Remain supporter (both of whom did well). I thought I'd record it and check whether that balance was reflected in the questions put by the BBC presenters.

Here are the questions:

Questions put to the pro-Remain businessman:

(by Ben Thompson, BBC) Marcus, you are clearly reassured by what you've heard from the Prime Minister. Reforms, a reformed EU and one you still very much want to be part of it.

(by Ben Thompson, BBC) What's going to be so interesting as the campaigns now get under way for either side is the fact that this is not black and white. There are so many shades of grey about what people want out of the EU and what they don't. Marcus, what is it that you are most worried about? Clearly you are supporting our continued membership but is there a worry there? Is there something...?

Questions put to the pro-Leave businessman:

(by Ben Thompson, BBC) It's interesting, Scott, isn't it? We talk a lot about that uncertainty, the influence it has on business. We don't know. It's unprecedented. No country has ever left the EU. We don't know what would happen. Are you not worried about that as a businessman?

(by Naga Munchetty, BBC) Scott, tell me. When David Cameron announced that he was going to be embarking on these negotiations - these negotiations that have taken a lot time, a series of meetings - was there anything or were you hopeful that you'd be convinced to stay in or had your mind completely been made up?

(by Naga Munchetty, BBC) And even with the spectre of that being renegotiated in the future?

As we were discussing on one of yesterday's threads, the language is something that's worth watching. The language of "spectre", "unprecedented", "uncertainty", "We don't know", "Are you not worried?" flowed from both BBC presenters here and related to the Leave side. On the other side we had words like "reassured" and "reformed" and "reforms".

And I suspect that David Cameron might be happy with Ben's description of what he's achieved as "reforms, a reformed EU" and Naga's "these negotiations that have taken a lot time, a series of meetings".

Incidentally, I had to smile at Ben Thompson saying "We talk a lot about that uncertainty, the influence it has on business".