Who would have thought it

The wonderful Daphne Anson has spotted a Twitter exchange between the BBC's Jon Donnison and someone who is apparently the Australia public broadcaster's answer to Jon Donnison: ABC Jerusalem correspondent Sophie McNeill.

JonDon, of course, is famous for being most emphatically not pro-Israel (to put it mildly).

Recently he's also proved himself to be no fan of Australia's firm immigration policy (also to put it mildly).

Here he manages to combine both sentiments in just one short, ever-so-impartial reply: 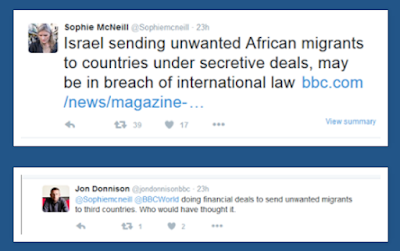 P.S. For those wanting some up-to-date evidence of JonDon's reporting of Australia's migration policy, there's his 'analysis' on a BBC report from a couple of days ago, Australian churches offer to take in asylum seekers. Describing the situation regarding a couple of hundred or so migrants now facing being sent back to Nauru, he writes - starting with that stand-by phrase for biased journalism "Many would think":

Many would think the government would be concerned about the negative coverage the story has generated internationally, with Australia being portrayed by many as cruel and lacking in compassion.

But ministers also know that domestically, their tough policies towards asylum seekers have broad public support.

Who is that "many"? Not that many in Australia by the sounds of it. Probably not many in the UK either.

His next sentence reads:

The headline in one of Australia's best selling newspapers, Sydney Daily Telegraph, this morning was "Turn Back the Kids."

And his view about that is made perfectly clear in another of his ever-so-impartial tweets - this one a highly sarcastic affair: 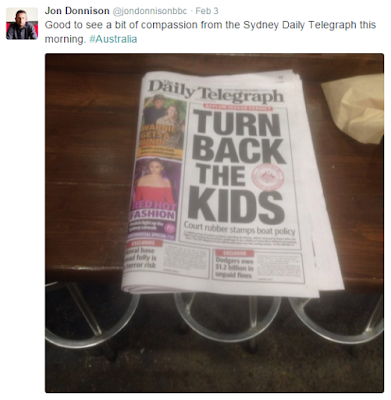