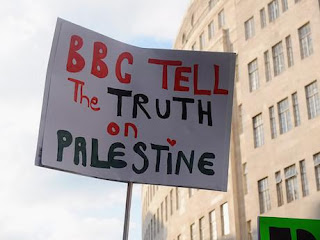 A few days ago I read this online article by one of the BBC’s favourite ‘experts’ on the Middle East, Abdel Bari Atwan. Or 'Barry', as Gavin Esler likes to call him.

It’s entitled “A culture of Silencing”, and it begins as a self-pitying response to the cancellation of an event he was to chair at the British Houses of Parliament, no less, and continues as (the usual) diatribe of anti Israel hate-speak.

(Labour groups seem to be experiencing a spot of trouble recently, though I have no idea if Atwan's particular cancellation had anything to do with this particular row over antisemitism.)

“The session was cancelled at the last minute under extreme pressure from the Labour Friends of Israel parliamentary group and a campaign waged against me in the pages of the Jewish Chronicle. This is not the first, and I am certain it will not be the last, time I have been prevented from offering the Palestinian point of view by the powerful machinations of the Zionist lobby and the propaganda department of the state of Israel known as Hasbara (‘explaining’).”

As Bari acknowledges, he is a frequent guest on TV, but he attributes the times when bookings have been cancelled at the last minute “for no apparent reason”, to the “powerful machinations of Jewish Zionist lobby and the propaganda department of the state of Israel.”

And, for what it's worth, any fule kno that last moment cancellations are par for the course where the BBC is concerned. They’re notorious for dumping speakers mercilessly if they’ve secured someone more interesting on the guest list.  Actually, I lie. I once read a piece by someone (other than Abdel Bari Atwan) who was furious because he’d wasted a whole precious day on stand-by, and was eventually unceremoniously dropped.

In any case I’d have thought Bari's ubiquitous appearances on Dateline would have more than compensated for the occasional cancellation. As far as some of us are concerned even one appearance is one too many.  That’s how powerful we are.

As far as the Palestinian point of view is concerned, well, does Bari not think it is offered sufficiently? Or is Bari one of the pro-Palestinian activists who think it is perfectly reasonable to expect the BBC to BDS all references to Israel?

“Readers may recall that during the invasion of Gaza in 2009 – in which 1600 Palestinians were slaughtered whereas Israel suffered nine casualties – broadcast commentary on the atrocity (in Britain at least) came mostly from Benjamin Netanyahu’s spokesman, Mark Regev, rather than Palestinians.”

Apart from the cheap casualty-toll reference, this is absolute tosh. And deluded and irrational. Yes, the Israeli PM’s spokesman Mark Regev was indeed seen and heard at that time, and although the BBC is supposed to be impartial (someone should tell Bari) he (Regev) was constantly subjected to (almost exclusively) utterly hostile interrogation by anchors from all British TV channels.

Bari complains that he was disadvantaged by Regev’s dastardly ability to lie and smile, whereas poor Bari’s powers of persuasion are hampered by his uncontrollable passion and volatility. Confusingly, he then seamlessly brags about the size of his following including the millions on Twitter.

“I am only one of hundreds, if not thousands, of media figures the Israelis seek to contain. Sites such as BBCwatch and CiFwatch (referring to the Guardian’s ‘Comment is Free’ pages) routinely blacklist people who criticise Israel.”

What? What on earth?   He proceeds to cite an assortment of Israel-haters, antisemites and BDS advocates to back up his claim that he is being victimised and that the anti-Israel, antisemitic views of his own and of the persons he lists are somehow being silenced by the Israel lobby.
If only.

He goes on to discuss “terror” as if he doesn’t advocate it himself. Oh, oh! pants are on fire!

“Following an October 2003 article in which Atwan claimed that the U.S. is to blame for the Arab world's hatred of it, a Yemenite journalist and columnist for the London Arabic-language daily Al-Sharq Al-Awsat, Munir Al-Mawari, stated: "The Abd Al Bari Atwan [appearing] on CNN is completely different from the Abdel Bari Atwan on the Al Jazeera network or in his Al Quds Al Arabi daily. On CNN, Atwan speaks solemnly and with total composure, presenting rational and balanced views. This is in complete contrast with his fuming appearances on Al Jazeera and in Al Quds Al Arabi, in which he whips up the emotions of multitudes of viewers and readers."[22]

In response to Atwan's legitimization of the Mercaz HaRav shooting in March 2008, Lior Ben-Dor, a spokesman at the Israeli Embassy in London, said: "The problem is that when addressing the British public, he tends to hide his true opinions and ideology - his support for terror and the murder of civilians. This article reveals Atwan's real colors, a supporter of fundamentalism and terror, and hence he should be treated accordingly."[1]

I know, I know. We don’t much trust Wiki. But...who you gonna trust? Wiki or Bari?

It’s interesting to look at the comments below this piece though. One or two Harry’s Place regulars have contributed, which helps to take the nasty taste away from having read the wretched thing.

The enduring question remains. Why does the BBC see this duplicitous person as worthy of a platform they have in it their gift to bestow or withdraw at will?
Posted by sue at 13:31