Mark Easton wins it for the EU? 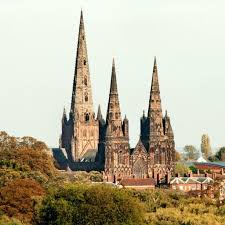 I imagine that some of you may have seen Mark Easton's report from Lichfield Cathedral on BBC One and the BBC News Channel (throughout Wednesday evening).

That was the report where a group of 'undecided voters' were guided through the issues by Mark Easton (and someone from former Gordon Brown pollster Deborah Mattinson's Britain Thinks) and then gave their views on what they'd heard.

They then voted 9-7 to stay in the European Union when asked, "In or out?"

(As you may be aware, that question was judged too biased and replaced by 'Leave or remain?', but that  obviously didn't trouble Mark here).

Did they vote that way because of what their fellow 'undecided voters' had said there, or because Mark Easton had guided them in that direction? (Or because they weren't really undecided?)

...though we did briefly glimpse one of Mark's reports on a TV screen behind and hear him saying, "The British are reluctant Europeans" - which is, perhaps, a loaded way of putting it, given that it's perfectly possible to say, "Yes, of course I'm European - and proud of it. I just don't want us to be part of the EU".

If Mark Easton's reports swayed them then that might suggest 'BBC bias' in action, and working, might it not?

(I'd love to see the whole event, perhaps on YouTube - though I suspect the BBC would never put such an unfiltered event on YouTube). 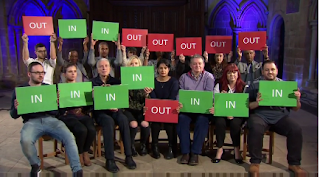 Here then, in order of appearance, are the views expressed by the 'undecided voters' in Mark Easton's BBC TV report (some of whom sounded far from undecided to me):

TOPIC ONE: British Identity and the EU

You can be part of the EU but also keep your own identity. And we've managed to do it for so many years as it is, so why can't we continue?

I think we've already submerged a little bit already being in the EU. [Question: How does that make you feel?] Sad really.

British identity has been diluted but I think quite positively because it makes us more open to greater integration.

I feel I main a certain degree of my cultural roots whilst living in the UK and feeling part of Europe.

TOPIC TWO: The financial benefits/costs of the EU

If we do pull out of the EU, there'll be a lot of bad feelings and like it would raise the prices for us - not for us like as the general public but where the businesses are, where the trading's done and the deals are made.

I think it's quite a positive thing that I could work anywhere and a lot of my friends work in other European countries and I think it's really good we've got that passport to go all around.

The problem for me is that you're getting people coming over from Romania or Poland or other countries in the EU - very poor countries. They can come straight here, not necessarily having a job and they can get benefits straight away and they've got free health care straight away.

There are people who have come from Poland I know of who are doing jobs...without being rude to British people...that the younger people in our generation just won't do.

We're only small and there's only so many we can take until it puts a strain on our resources to the point where we're one of the countries that will be struggling.

I'm just wondering whether it is just safe to pull up that drawbridge now, or we will be completely sucked up and dried up and Great Britain won't exist any more.

You can't live in splendid isolation. I just don't think you can. I think we do need other countries.