What about the Muslims? 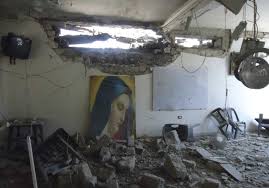 The splendidly-named John Pontifex from the Catholic charity Aid to the Church in Need was on this morning's Sunday backing the cross-party campaign to get the UN to declare the attacks on Christians in Syria and Iraq a genocide.

He laid out in stark terms the sheer scale of the assault on Christians and Yazidis there.

Here's a flavour of how it went, with Ed Stourton taking a familiar BBC line:

Ed Stourton: You have described, quite properly, what's happening to Christians and indeed Yazidis in Iraq and Syria but it nevertheless remains a fact, does it not, that the vast majority of people who have been killed in both those places in the violence and the fighting are Muslims.

John Pontifex: That is indeed true. But if you look at the levels of emigration - migration from the region - you'll see that Christians actually are proportionally leaving in greater numbers. For example, I went to Homs and we heard from the bishops there that 95% of Christians have left Homs. And this is a city where Christianity goes right back to 50AD and before. And it's true that everyone has suffered but when you see as I saw churches being completely devastated and shrines smashed to pieces and icons with bullet holes in them you can see that the individual attacks are cruel...

John Pontifex: ...and have a specific persecution in mind.

Ed Stourton: But that's true of many attacks on Muslims too, isn't it?

John Pontifex: It is, but we're not trying to make a case to show that persecution of Christians stands alone, above and beyond the others....

Ed Stourton (interrupting): Ah but, if you single it out as genocide then doesn't it diminish the suffering of other people?

John Pontifex: Not necessarily. And in his letter Lord Alton has specifically highlighted other minorities as worthy of particular focus. But it needs to be said that in our politically correct world, standing up for our own - namely Christians in this case - is something that we're sometimes reluctant to do. So what this does is to redress the balance and indicate that we are willing to stand up for our co-religionists.