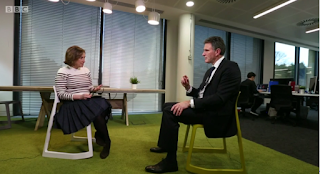 Can I turn now to Europe? Do you think the British financial sector will be better off or worse off outside the EU?

Now, the fact that Kirsty clearly knew that Mr McEwan was going to say that before she asked her question - as she should have known, given that she's (famously) well-clued-up on Scottish matters and that RBS's views on the matter have been widely reported before - is strongly suggested by her follow-up 'question' (which I read as little more than an invitation for him to expand on the point he'd just made):

Just more on that uncertainty because, you know, RBS has said that economic growth is being undermined by uncertainty over the EU vote...Yes?

I'm pretty sure that Newsnight knew what they were about when Kirsty put those questions to Mr McEwan and, indeed, the programme's introduction specifically highlighted this part of the interview rather than the bits on RBS's past and present.

I'm afraid I'm going to have to put that down to 'pro-EU bias' (and if you disagree please feel free to say so below).

As I'm still keeping a sleepy eye on Newsnight's coverage of the EU referendum (which so far has tilted markedly, in several ways, towards the 'Remain' side and against the 'Leave' side - as I've previously tried to explain)...

...here might be a good place to catch up on this week's other editions of Newsnight as regards this issue. So... 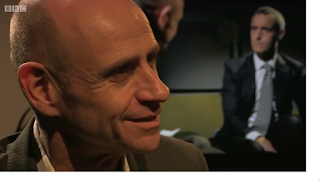 Monday's edition featured what I, in a rather cynical (but accurate?) way, saw as a canny pro-EU manoeuvre on Newsnight's part.

In a feature about the use of big-denomination bank notes by criminals, Evan Davis interviewed the British head of the EU's police agency Europol, Rob Wainwright.

Evan went on to question him on his views about a possible Brexit and the EU-employed Brit made his anti-Brexit views plain, claiming the UK would be at greater risk from international crime (financial, terrorist, etc) if we left the EU.

In fairness, Evan did remind Mr Wainwright that non-EU countries (like Norway) had alternative arrangements with Europol but Rob Wainwright stuck to his (pro-EU) point, Evan didn't pursue him further, and Newsnight viewers were, in the end, presented with yet another 'expert' opponent of Brexit, this time making the important security case against leaving.

This was mostly historical tittle-tattle, though Miss Rees-Mogg did put across some pro-'Leave' points (in broad-brush terms)...whilst framed against a contradicting background!: 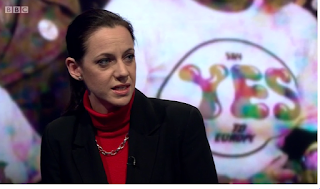 Did that really compensate for the head of Europol's warnings against Brexit? (I'm going for 'Hardly!')

And Tuesday's edition of Newsnight featured the former 'whatever the Portuguese is for Le Grand Fromage' of the EU, José Manuel Barroso.

Or 'Sir', as James O'Brien kept calling him.

James O'Brien usually interrupts guests on Newsnight like a man possessed (by his own ego) but here the LBC/BBC man largely let Sr Barroso go on and on (and on), with some answers stretching (uninterrupted) for over a minute and one reaching very close to two minutes. He asked him soft questions about how he feels David Cameron is doing, how optimistic he feels, what he thinks of Cameron's plans and sovereignty, etc, and "What would the European Union look like without the United Kingdom in it?" - the last being the closing question. The one bit where he did push a little involved Angela Merkel's migrant policy.

As you'd expect, Mr Barroso put the EU's case - and the case for the UK to stick with the EU.

I'm also chalking this up on the 'pro-Remain' side of the board.

And that was that for this week - three voices making the case (at varying lengths) against leaving the EU and one (briefly) putting the other side of the argument.

I think the evidence of bias on Newsnight here is really beginning to build up.

Some proper, lengthy interviews with 'Leave' supporters on the substance of the issue are urgently needed to even begin to rectify the situation.