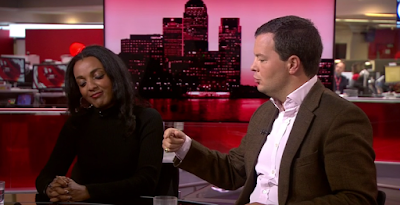 Gavin Esler had introduced the Trump-Hillary discussion in the following way:

Here's a sample of the following debate:

Alex Deane: Well, no, but the fact that he's even further away from the political consensus may be part of his appeal. Part of the answer to your question may also lie in the way in which it's framed. If you're only going to list the supposed faults of one of the candidates then you're going to emerge with a particular view of the debate. Maybe if we decided to list the 'cartoon sins' of Hillary Clinton on the other - standing my her man whilst covering up systematic abuse of women, an enormous email cover-up and abuse of her position as secretary of state, Benghazi and so forth, then you might come to a more balanced view, which is: 'They are both terrible candidates'.

Nesrine Malik; You see, I think it's really interesting what Alex said there because one of the reasons Donald Trump's in the position that he is today is where everyone is just thinking, 'How how this happened?', is because of this false equivalence, this, you know, sort of desire to not come across as patronising or a liberal snob, and say 'Well, they're both terrible'. The New York Times did a deep dive investigation in Hillary's emails, completely unwarranted, because they wanted to look like they were kind of giving both sides the same level of scrutiny. And this false equivalence...the interesting story is not the normalisation of Donald Trump, it's the demonisation of Hillary. Donald Trump is a creep and Hillary is a sort of slightly....not slightly, let's say...let's even concede that she is, you know, moderately corrupt or inept or problematic. If you compare that to all the sitting presidents that have had email scandals, that have had corruption, bribery scandals, have had trade deal scandals, it's not comparable. So I this this false equivalence is one of the reasons why Donald Trump is where he is today. I'm sorry, before I conclude...to answer your question, 'Does it matter that he does all these things?', it doesn't because people are probably being tribal and they're voting for Trump, and the most interesting thing is that they don't care about his lies, because there is this sense that there is a compact between Donald Trump and his supporters and that 'I'm lying to them, but I'm not lying to you'....

Alex Deane: I want to come back in because that was aimed at me. I wasn't seeking to draw what you've termed 'false equivalence' between these two candidates. I was seeking to correct - with respect - what I thought was kind-of Gavin's one-eyed introduction which was saying. 'All the sins of Donald Trump, why is this even close?' If you want my view it's that she's a must worse candidate than him. That is to say, she's systematically corrupt. That's to say, she would be part of the Democratic machine which would abuse office in the same way that her husband did. Donald Trump, on the other hand, just comes across as an idiot....