"trouble in the banlieues of Paris"

A comment from esteemed blogger  Daphne Anson citing two pieces about  anti-Chinese sentiment in France prompted me to have a further look. 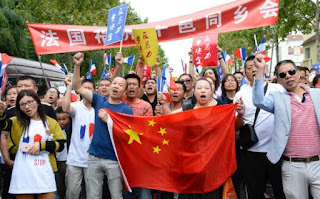 The Telegraph piece by David Chazan, is a  report about a demonstration that took place in August. The Chinese demonstrators were demanding protection from “muggers who they say prey on them because they are seen as easy targets.”
Chazan gives this fatal incident the passive treatment:

“The death of a 49-year-old Chinese tailor after being badly beaten in a robbery earlier this month has lent new urgency to the long running complaint that Asian immigrants are systematically attacked and robbed in the French capital.”
[…]
“……Chaoling Zhang, the father of two who died on August 14 after being punched to ground in the north-eastern suburb that is home to some 4,000 Chinese immigrants. No arrests have been made over the attack.”

(The BBC did report the incident at the time)

“The father-of-two had been attacked by three men while walking with a friend, a police source said.”

The BBC’s recent article by freelancer Kevin Ponniah A killing in Paris: Why French Chinese are in uproar was published on 26th October 2016 and includes the following passage:

“During a recent trial of three youths accused of 11 attacks in a three-month span in Aubervilliers, the defendants insisted the ethnicity of their targets was just a coincidence. But when interrogated by police, they reportedly admitted to seeing Chinese people as "easy targets" with money on them.”

So it seems that the police did make some arrests. The BBC’s piece describes the killers of “Zhang Chaolin", a 49 year old Chinese tailor as  “three teenagers” and all reference to ‘ethnicity’ is confined to the term “ethnic Chinese”. Kevin Ponniah deals with the tribulations of various ethnic Chinese individuals and the wider issue of anti-Chinese racism in France. He focuses on a Paris suburb, apparently a kind of Chinatown, Aubervilliers, which he describes as:

“A working-class and immigrant-heavy area, home to more than 1,200 mostly Chinese wholesalers, Aubervilliers is an important European textile centre. Buyers come from far and wide to haggle over Italian-made coats and Chinese-made shirts.” 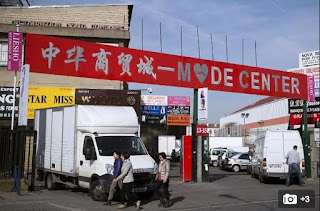 In stark contrast to the BBC’s standard reporting of murdered ‘nameless’ Israelis, the article gives the victims of French anti-Chinese racism the ‘full Palestinian victimhood’ status without any mention of the ethnicity of the perpetrators.  As Daphne Anson says, this leaves the impression that the anti-Chinese racism is coming from the indigenous “white” French.

The Telegraph has this, albeit somewhat buried in the depths of the article:

“Community workers say many muggings are committed by members of other minorities living in the area, generally of Arab or African origin.

Paris officials corroborated the figures but declined to identify the robbers by ethnic origin.”

A link takes you to this Telegraph report about trouble in the banlieues of Paris from 2005.
"A country in flames… French cities teeter on the edge of anarchy" 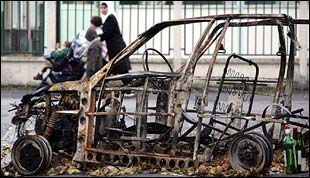 But is this *“NTDWIist” attitude unique to the BBC?  I Googled, and came up with several pieces from France 24 which were just as evasive.

France 24 - lots about the victims, nothing about the perpetrator.

Reuters, a similar story, but the piece did include this ‘random’ information:

“Tourist traffic in Paris has dropped significantly since attacks by Islamist militants last November, leading to sharp declines in sales for luxury goods makers but also for the capital's retailers, hotels and restaurants.”

“Another township of Seine-Saint-Denis is Aubervilliers. Sometimes referred to as one of the "lost territories of the French Republic," it is effectively a Muslim city: more than 70% of the population is Muslim. Three quarters of young people under 18 in the township are foreign or French of foreign origin, mainly from the Maghreb and sub-Saharan Africa. French police are said to rarely venture into some of the most dangerous parts of the township.


The southern part of Aubervilliers is well known for its vibrant Chinese immigrant community along with their wholesale clothing and textile warehouses and import-export shopping malls. In August 2013, the weekly newsmagazine Marianne reported that Muslim immigrants felt humiliated by the economic dynamism of the Chinese, and were harassing and attacking Chinese traders, who were increasingly subject to robberies and extortion. The situation got so bad that the Chinese ambassador to France was forced to pay a visit to the area.


In response, the Socialist mayor of Aubervilliers, Jacques Salvator, suggested that the violence could be halted if Chinese companies would agree to hire more Arabs and Africans. The Chinese countered that Muslims do not work as hard as the Chinese, that they are more demanding, and that they complain too much, according to Marianne.
After local officials refused to act in the face of increasing Muslim violence, the Chinese threatened to "call on the Chinese mafia" for protection. Muslims responded by launching a petition to have the Chinese expelled from the area.


Also in Aubervilliers, the magazine Charlie Hebdo reported in 2012 that the town hall was obligating non-Muslim men who want to marry Muslim women to convert to Islam first, even though France is ostensibly a secular republic. One such man, Frédéric Gilbert, a journalist, was told:


"You can convert in any mosque in three minutes. All you need do is to repeat 'with conviction and sincerity' this sentence: 'I recognize that there is no god but Allah and that Mohammed is his prophet,' and the Imam will agree that you have converted to Islam.’”

My friend, a fusspot, once deconstructed a burger he was suspicious of, only to find a beetle-like corpse within.
“Seek and ye shall find” said a onlooker, disapprovingly.  In other words it’s your own fault;  if you’d been less picky and just eaten it you’d have been none the wiser.

Is this what I’ve just been doing, seeking and finding, and if so, would we have been better off none the wiser?