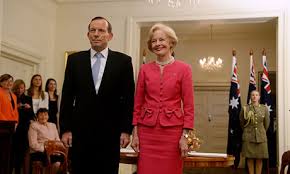 Tony Abbott has been sworn in as Australia's new prime minister. So how does the BBC's new Sydney correspondent, Jon Donnison, choose to mark the occasion?

By discussing the disappointment felt by some that Mr Abbott's cabinet has only one woman in it.

This gives him the chance to link again to Julia Gillard on YouTube accusing Tony Abbott of being a misogynist. Jon Donnison's first non-YouTube link then (predictably) carries readers straight to the UK's very own Guardian newspaper (no fan of Mr Abbott's) to back up the charge than Mr Abbott has a case to answer.

Going by what we've seen so far, the new Australian prime minister can expect plenty more snide, negative coverage from Jon Donnison in the years to come.

Will there be an 'Abbott as Hitler' poster up in the BBC's Sydney bureau soon?
Posted by Craig at 07:07