The Story of the Jews (Part Two) 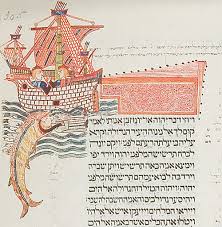 Did you see the second episode of Simon Schama's The Story of the Jews, broadcast last night on BBC Two?

If not, please allow me to tantalise your taste-buds about it (or not, as the case may be!)

It moved chronologically from Rome's destruction of the temple in 70 AD to the expulsion of the Jews from Christian Spain in 1492, when hundreds of thousands of people were "sent packing from a country where they'd lived for over a thousand years."

This latter event bookended the programme's narrative arc and, as with last week's programme, the episode opened by concentrating on a single object - this time a exquisite Hebrew bible, completed by a pair of Sephardic Jews, Moses Ibn Zabara & Joseph Ibn Hayyim, in 1476, full of lustrous illustrations and drawing on Muslim, Christian and pagan influences. Simon exulted in its beauty, but used it to dramatise the point that just sixteen years later "the Jewish world that had made it was brutally snuffed out by royal decree".

It represented the main theme of Episode Two of The Story of the Jews: "What this bible says to me is that even amidst torture and grief, even on the eve of destruction, Jews took to heart what's on this page - a verse from the Book of Deuteronomy: 'I have set before you life and death, a blessing and a curse; therefore, choose life.'"

The episode focused on at how the Jews survived under Christianity and Islam - "new religions that saw Judaism as an unwanted grandpa religion, too old, too obstinate in its ways to accept a new messiah or a new prophet". "It was the fate of the Jews to be exiles in the lands of the Cross and the Crescent, struggling to find a foothold on the narrowing ground between grudging toleration and murderous hostility."

Simon Schama's take on this was one which many of us will have found familiar from many other BBC documentaries - that the world of medieval Islam, as exemplified by Umayyad Al-Andalus in Spain, was a much more humane one than that of medieval Christianity. It was a world where Jews could "live in the light". 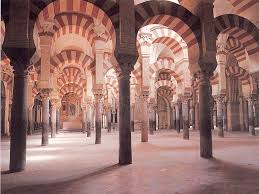 Simon said that 90% of all medieval Jews lived under Islam, only 10% under Christianity. Those who lived under Islam may have been classed as 'dhimmis - second-class citizens, living under the condescension of their Muslim betters and forbidden to do certain things, such as to carry weapons to defend themselves, or to ride horses - but still, as in medieval Cairo, huge numbers of jobs were open to them, and they lived in relative security. In tolerant Al-Andalus, painted in glowing colours by Simon Schama, Jewish culture flourished. There was none of the demonisation of the Jews, as expressed by the medieval Christians. Later Islamic sources, he said, emphasised that Judaism and Islam were originally closely bound together and could have become even closer.

Yes, there were fleeting, unexplored hints of something darker under the benign cloak of Muslim rule - a passing mention of North African Islamic fundamentalism threatening the Jews of Al-Andalus with "intolerance" and an acknowledgement that the Jews of Arabia were massacred by the forces of Mohammed (though only after they had "turned bitterly and publicly critical" of the new religion) - but the overall message of the programme remained clear: It was much better to be a Jew under the Crescent than under the Cross.

As for Christianity, well, for the story of the Jews it all began with St. Paul - his aggressive determination to kick off the "chains" of Judaism from the new universal religion, and his stressing of the "sinister note" found in the early gospels - that the Jews were "Christ-killers": "His blood be on us, and on our children". [Are there no anti-Jewish verses in the Koran? If there are, Simon certainly wasn't for mentioning them.]

"Cruder, fiercer Church fathers followed" - above all the Syrian bishop, St John Chrysostom, who wanted a complete separation between Jews and Christians and began the long, dark tradition of accusing Jews of consorting with demons, inhuman monsters "who sacrificed their sons and daughters to devils...worse than wild beasts". His message soon became official policy in the new Christian Roman empire. Jews were excluded from public life, new synagogues were outlawed, gathering together in public was prohibited and the early Talmud was banned. While under Islam the Jews could "live in the light", Christian Rome began the process of pushing them "into the shadows".

After his exploration of how the Jews lived "in the light" under Islam, Simon shifted us to medieval England, where "the shadow of the Cross" again fell over the Jews.

I was intrigued by Simon saying at this point that "The Jews had been first invited to England by William the Conqueror in 1066". I would have loved to know why William (a Christian king, after all) valued the Jews enough to invite them to England, but Simon didn't answer than question. Instead, he told us how some of the Ashkenazi Jews of England had thrived, up until the reign of Richard the Lionheart (1189-99) - especially Aaron of Lincoln, money-lender to the Church and the Crown, and the richest man in England. 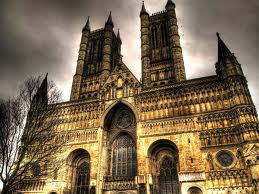 Unfortunately, that eventually made Aaron a target. Tragedy followed with the coming of Richard and his "holy war", as mobs began their own "murderous crusade" against the Jews of England, "the demon money-bags" to whom so many owed money. Carnage ensued. The authorities failed to protect the Jews from popular hatred - a hatred most shockingly exemplified by the blood-libel of Hugh of Lincoln, a Christian boy said to have been murdered in "a black re-enactment of the crucifixion" by the Jews of Lincoln. Henry III gave the fiction royal endorsement, and ordered the hanging and imprisoning of a large number of Jews. Hugh's shrine became a place of popular pilgrimage. It all culminated with the expulsion of the Jews from England by Edward I in 1290. "It took 700 years from the Jewish community to return to Lincoln", Simon said.

From there it was onto the climax of the episode - the events in Christian Spain which led up to the expulsion of the Jews there in 1492, something I won't spell out again here as it's an eternally-harrowing but fairly well-known story. That said, there were many details in Simon Schama's account that I didn't already know about, and which made it worth watching - especially his take on the Barcelona Disputation "show trial" of 1263 - and Simon told the story with some feeling:

"So Jews did what Jews do. They packed. And you all know those pictures of long lines of pathetic, bedraggled figures, toting bags along dusty roads. That began here, in 1492, in Spain. And one of the most glorious, rich, sophisticated, poetically-beautiful cultures there had ever been in Europe came to an end."

But, Simon said, the Spanish Christians couldn't take away from the Jews their language, their music, their poetry, their food, "and, above all, of course, inside their heads, inside their hearts, inside their little books, inside all the things designed for portability and endurance, their religion."

Where did they go? "Almost everywhere." Morocco, Italy, Egypt - and, "above all", to the Ottoman Empire "where the Turkish sultan actively encouraged the Sephardim to resettle." 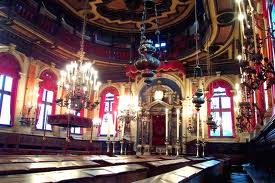 The programme ended in commercial Venice, whose rulers found the Jews "priceless" for the edge they gave the city in trade (due to their family ties to the Islamic word) and who, therefore, offered the Jews "a welcome of sorts", isolating them, restricting their movements and activities, confining them at night to a locked ghetto - the world's first ghetto - but giving them a little space to breathe amidst all the poverty and condescension. Simon found hope in the beauty of the Spanish and Portuguese synagogue in the ghetto (La Scola Spagnola), where the Jews chose life, dug deep into their traditions, honoured their religion. There he ended the episode, clearly moved.
Posted by Craig at 10:49