Paul Mason gets a beating...at 'The Guardian' 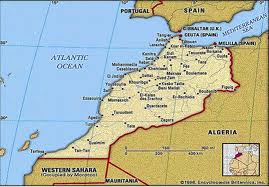 Talking of Paul Mason and his EU-critical reports, Newsnight's soon-to-be-departing "furrow-browed theorist from the Marxisant Left" reported from Morocco on Wednesday night's programme.

His subject was the plight facing the mass of sub-Saharan Africans seeking entry to Spain (and the EU more generally) via the North African kingdom. 'The Spanish aren't willing to let the poor migrants in and the Moroccans aren't being very nice to them either' is the basic gist of his report.

You can view the report here (for a few more days) or read Paul's online article about it here.

What fascinated me though was reading Paul Mason's other article about it - at the Guardian (naturally) - and the remarkably unfavourable response it got from the Guardian's commentariat. It has been well and truly fisked (or should that now be 'masoned'?). I doubt Paul Mason was expecting that. (I certainly wasn't!)

The points - and they are many and various - range from severe doubts about the credibility of the stories Paul Mason's migrants are telling (which they claim he's swallowed uncritically) as well as swipes at the apparent inconsistencies in Paul's own narrative right through to disdain for what many a commentator there feels to be his inability to see that the EU's unwillingness to allow in huge numbers of (im)migrants might not necessarily be a bad thing. Others say he's not getting the 'illegal' part of the phrase 'illegal immigrant'.

Spare me your crocodile tears, Paul.

Mr Mason doesn't appear to have done much research.

More nonsense from the maudlin, overly-sentimental school of journalism. Stories to warm the heart and make the writer look compassionate, but without a hint of reality or the repercussions associated with allowing large numbers of unskilled people into Europe.

While part of your taxes, via the EU, is being used to keep the African illegal immigrant tide partially at bay, another part, via the BBC licence fee, is being used to denigrate this effort and solicit sympathy for the lawbreakers. Swings and roundabouts ain't in it.

The BBC's article was never open for comments and, of course, on Newsnight Paul's report went completely unchallenged.