The Story of the Jews (Part 4)


Simon Schama's The Story of Jews is, beyond a shadow of a doubt, one of the best things the BBC has done in years.

A good deal of the credit for that goes to Simon Schama himself. As a story-telling historian, few can match him.

This week's episode, Over the Rainbow, took us from Eastern Europe to the United States and back again - from the Pale of Settlement to The Wizard of Oz, and then (leaving a lump in this viewer's throat) to a village in Nazi-occupied Lithuania - homeland of Simon Schama's own family, on his mother's side. Just one Jewish survivor lives there now, surrounded by his own carvings evoking the lost world of Lithuania's Jews.

The early stages of the programme vividly conveyed the extraordinary variety and vitality of Jewish life in the Russian Empire (at that time including Lithuania, of course) - despite the oppressive restrictions imposed upon the Jews who lived here and the extraordinarily vicious pogroms periodically flung against them. Simon Schama's enthusiasm for this vibrant and diverse culture was infectious, and he fairly threw himself into his descriptions of it.

It was out of this rich culture that much of the best of American 20th Century popular culture sprang, as large numbers of Jews fled the increasingly savage anti-Semitism of Europe's east for the chance of a better, freer life in the United States of America, and brought the many strains of their culture with them, transplanting and transforming them, giving us many of the crowning glories of Tin Pan Alley (Irving Berlin, the Gershwins, etc) and leading and shaping the creation of Hollywood.


The programme opened in the ruins of Zvonárska Synagogue in Košice, Slovakia [above], where the sense of desolation and absence was tempered somewhat by "the rainbows coming through the [stained] glass." "Out of the dust burst the colours", said Simon. And so did the memories, as he imagined the former congregation gathered there. In the spring of 1944, all 15,700 Jews in Košice were sent to their deaths in Auschwitz, but "this wasn't a place that sat passively waiting for its death sentence."

And it was that final thought which spurred the first part of the programme, as Simon Schama conjured up the "thriving, confident, noisy" Jewish life which existed right across Eastern Europe before the Holocaust - "a world that lives and breaths, and dances and sings". And the switch of focus to America was then viewed in this light:


"That this world somehow flourished despite all the pounding storms that would come its way is an escape act so epic that it counts as one of histories all-time redeeming miracles. Even when systematic annihilation overwhelmed the people the world that had nourished them survived. This is the story about how this unique culture of faith and ferment, of poetry and music, of the search for deliverance from brutality and oppression did not get pulverised by the hammer of history. It just changed its address."

The story of the Jews living in the lands ruled by Tsarist Russia is, perhaps, less familiar to us in the West - or at least it is to me - so I was particularly struck by this part of the programme.

Eastern Europe used to be the home to over 5 million Yiddish-speaking Ashkenazi Jews, the largest population of Jews in the world. They came from France and Germany, fleeing persecution, around the 13th century, and settled in the huge, tolerant Polish-Lithuanian Kingdom. The Polish kings allowed the Jews to prosper, using them to collect their taxes. The carve-up of Poland at the end of the 18th Century saw most of the Jews falling under Russian rule. Russian merchants took against this new competition, and the Russian government expelled the Jews from all their main cities and restricted them to the Pale of Settlement. 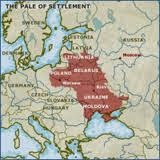 We heard what life was life in the shtetls (little towns) of the Pale, and it was often harsh. Jews were forbidden from the cities, the professions and the universities and not allowed to own land, and Jewish boys as young as twelve were forcibly conscripted into the Russian army for up to 25 years.

Yet they formed real, solid communities, looking inward, out of necessity, towards the treasures of their own culture, they did a remarkable range of jobs and they certainly knew how to celebrate a wedding!

We heard of the emergence of Hasidic Judaism, with its ecstatic, joyous mysticism [an especially fascinating section of the programme], and of Odessa, the city where Jews, modern Jews, who found the shtetls too claustrophobic, could find a place. Among them Leon Pinsker, whose proto-Zionist pamphlet Auto-Emancipation urged the Jews towards independence and national consciousness, and mooted a Jewish homeland - possibly in the Holy Land.

That pamphlet was published in the year following the assassination of Tsar Alexander II by the left-wing terrorist group The People's Will. One of the plotters was a Jewish girl, and within a month a tidal wave of pogroms (from the Russian word meaning 'destroy') began across the Pale of Settlement. These waves kept on coming, culminating in the massacres of 1903-1905 - massacres so extreme in their violence that many Jewish intellectuals despaired of ever obtaining equal rights in Tsarist Russia. They also noted that non-Jewish leftists didn't rush to their side. Some, including Pinsker, founded Hovevei Zion (The Lovers of Zion) in response - the first Jewish nationalist organisation.

It was at this point that things got a little confusing (for me) as Simon Schama's narrative would, I suspect, lead many viewers to assume to the organisations that comprised Hovevei Zion sprang up after 1905. Similarly, those viewers might also have assumed, from the way Simon described it, that Auto-Emancipation was published after the latest pogroms in Odessa (also around 1905). As far as I'm aware though (as I wrote earlier), Auto-Emancipation was published in 1882, just after the 1881 pogrom in Odessa, and Hovevei Zion societies first arose at that time too.

This was the period when many of the Jews of the Pale decided enough was enough, and began leaving for 'the Golden sanctuary', America.

They joined an earlier wave of Jewish emigration to the United States, dating from the 1850s, when Jews from Germany arrived in the country and began working their way up, building railroads and great businesses, becoming mayors of cities, achieving the dream. Their extraordinary success was illustrated by the magnificent Temple Emanu-El of uptown New York.

Most of the new wave of Jewish immigrants, though, ended up in the "mega-shtetl" of New York's Lower East Side. "Of the 2.5 million Jews landing in America between the 1880s and the 1920s, more than 60% of them began their new lives here, stuffed into a patch of land just one-and-a-half miles square. This lot were deeply different from the uptown Jews of Temple Emanu-El - proletarian, drenched in old world superstitions or radical politics and - worst of all - Yiddish! And, in the many ways, the New World was just a high-rise version of the old world they'd left behind."

It was this world to which Simon Schama devoted the next portion of the programme - especially the fusion of shtetl idealism and popular art - focusing on Yip Harburg, the left-wing lyricist behind that "anthem of the Great Depression", Buddy, can you spare a dime? (which may have helped Franklin D. Roosevelt defeat Herbert Hoover in 1933) - its tune based on a Jewish lullaby.


"What America had taught the Jews is the dream that they could be both Jewish and part of the wider culture in which they lived - a dream that was impossible in the old world of Russia - did actually have a chance of working out."

And it was to the dream-world of Hollywood - most of whose great studios were owned by the boys of self-made Jews - that Simon Schama took us next - and Yip Harburg too. 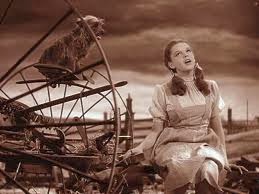 Harburg wrote the words for "the song that would come to define the Golden Age of Hollywood" - Somewhere Over the Rainbow from The Wizard of Oz ("this universal song of hope"). The song ended up in the film almost by accident, having failed to appear in the 'book' and striking the studio as unsuitable to be sung by the character of a young girl, but getting in because of Harburg and composer Harold Arlen's enthusiasm for it.

Then came the lump in the throat moment.

"I wish the story could end there," said Simon Schama, "with the collective success of America's Jews and the dream-world of Oz, but it didn't. Remember the date of that triumphant night at the Oscars [for Harburg and Arlen]. 1940."

It was to Plungė in Northern Lithuania we were taken, and to the fate of the three million Jews who had stayed behind. There was Jakovas Bunka, the last Jew in Plungė and his carvings of Jewish figures from before the Holocaust, and his memories. In 1941 the shtetl of Plungė was emptied of Jews in the most unspeakably brutal manner imaginable. Unspeakable? Well, Simon said, "As the grandchild of a Lithuanian Jewish family, I need to tell you what happened."

Which he did. Heartbreaking. You must watch it for yourselves - and for Simon Schama's closing words.

Next week will be the final episode, contending with the Holocaust itself and the State of Israel.