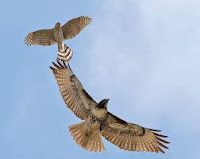 David Preiser at Biased BBC is not impressed with Mark Mardell. To put it mildly.

Quoting the BBC North America editor's latest blog post, David says "Even here the disgusting Mardell can’t help but let his personal bias cloud his reporting." [That "disgusting" being an allusion to MM's own description of Biased BBC.]

The sentence from MM's piece which has really got David's goat is "The hawks in Congress may not like this but many Democrats will".

This, as you may be aware, follows the Obama administration's decision to - as Mark puts it - pause over Syria (as a result of President Putin outmanoeuvring them. Not that Mark says that, of course!)

A casual - or even a not-so-casual - reader would assume that those hawks are Republicans, and that the 'pause' is one in the eye for those Republican war-mongers.

As David points out, however, the hawks on Syria are predominantly Democrats. Republicans are, by and large, far more 'doveish' over Syria.

The incontrovertible evidence to back up David's point isn't hard to find. Try the Washington Post for example.

Surely the BBC's top man in the U.S. is aware of that? So why did he put it that way?

For David, it's clear. Mark Mardell is "an absolute partisan", a "LIAR" and "a complete failure as a journalist", always more concerned about whether things look good or bad for President Obama than about anything else.