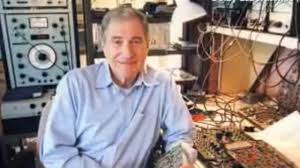 Today's The World at One marked the death of the inventor Ray Dolby.

Dr. Dolby was the man who took the hiss away from sound recordings (oh, how I appreciated that Dolby button on my cassette recorder!) and revolutionised the sound of the cinema, making it the overpowering experience we all know so well today (or at least we do if we actually go to the cinema).

The programme put in a call to Thomas Dolby, whose pop hits included She Blinded Me With Science and Hyperactive!, as you may (or may not) recall. He shares the same surname as Ray Dolby (as you may have spotted).

Thomas Dolby wasn't born with that surname though, adopting it in honour of Ray Dolby. Unfortunately for him, Dr. Dolby then took him to court to choosing such a stage-name.

According to Wikipedia, the courts - after a protracted legal battle - eventually decided that Dolby Labs had no right to stop him using that name. According to Thomas Dolby himself though (on The World at One), what actually happened was that Ray Dolby realised he was no Ozzy Osborne or Marilyn Manson, but merely an ordinary bloke who created great music (according to Thomas Dolby), and who then gave way and became his friend. Also, according to Thomas, Ray Dolby then named his own son (writer Tom Dolby) after him - though Wikipedia says that's a coincidence! (Who to believe - Thomas Dolby or Wikipedia?)

Radio 4's obituary show Last Word also led with Ray Dolby, discussing him, his life and his achievements with a former MD at Audio International Studios and a Professor of Film and Media History.

Ray Dolby's first venture into cinema came with Kubrick's A Clockwork Orange.  (Not a film I've ever seen). So here, as a tribute, is its title music - a distortion of one of my favourite pieces of music, the march from the Funeral Music for Queen Mary by Henry Purcell.

(It's not every BBC bias-related blog that gives you the theme music to A Clockwork Orange!)
Posted by Craig at 22:13