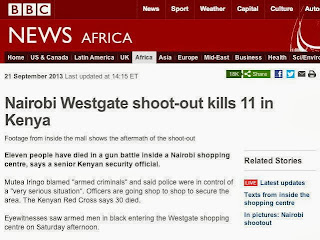 The conservative PJ Media website has posted a blistering hatchet-job on the BBC News website's reporting of the massacre in Kenya.

The author admits he's frozen a moment in an ever-shifting news stream, analysing a single variant of repeatedly updated report - and you can see all the variations in this article at NewsSniffer - but he spells out his evidence that the version of the BBC article in question is, at best, badly-written and, at worst, deliberately obscure and misleading.

The claim being made is that the BBC deliberately misreported these attacks by using an obscure and potentially misleading headline, an inadequately-informative first paragraph [lede] and follow-up paragraphs [nut grafs] which are hardly any more informative. None of them, the author writes, "mention terrorism, Islamic fundamentalism, the reason for the attack, that non-Muslims were targeted, nor any other of the truly germane facts about the incident."

Studies have shown that most news consumers only read the headline; the few that continue on to the body of the story only read the first paragraph or two. Only a small percentage of news consumers get further than that into the full text of the article. And it is this key detail that the BBC is relying on. They purposely suppress the crucial information from appearing in the headline, in the lede, and in the nut grafs, knowing full well that most people will stop reading after that point.

Only later in the article do some of the other details emerge.

In traditional news style, an article is supposed to be structured as a metaphorical “pyramid” of information, with the most important facts stated as concisely as possible at the very top, and with each sentence more details and more elaboration are added.

But in the postmodern BBC “biased reporting style guide,” the pyramid is intentionally inverted, such that the details you want to obscure are hidden so far down in the article that no one will notice them. The only reason to include these details at all is so that, if later criticized, you can truthfully claim that you reported “all the facts.”

But why would they do that?

One likely answer is fear: They’re afraid that if they make Muslim terrorists “look bad,” then the infidel reporters (or their offices) will be targeted. But I think the answer is a bit more complicated: The progressive worldview promoted by the BBC and their ilk rests on the notion that first-world nations are oppressors and third-world people are victims, and any incident — such as this one — which undermines this hypothesis must be suppressed. Thus, any time Islamic fundamentalists commit an act of violence, the Western politically correct media does its best to ignore, shrug off or (as we see here) intentionally misreport what happens.

And the next time someone asks for evidence of media bias, send them a link to this essay.

I was watching this story unfold across several media outlets yesterday evening - Sky, the Telegraph, ITV, France 24, etc - and I would certainly say that, though the the BBC gave most of the basic facts of the story, it also left the most unsaid, especially as regards eye-witness accounts of the explicitly sectarian angle to the attacks. It mentioned them almost in passing, and didn't dwell on them.

I noticed that at the time but wasn't particularly bothered as I was more concerned at the time to find out what was actually happening, which I was finding from reading lots of different news sources.

Sky, and sundry others, featured headlines and articles leading with and concentrating on the sectarian angle. The BBC didn't, and you had to read quite a long way through the BBC's article to find even a short eye-witness account that backed up that angle to the story.

Only when an al-Shabab spokesman contacted the BBC to say that his Somali Islamist organisation was behind the terrorist act did that angle come to the fore in the BBC's (online) reporting, though even then that concentrated on the grievances of al-Shabab over the African Union's military involvement in Somalia.

It cannot but have been a deliberate choice on the BBC's part to shape their online report in such a way, even at the risk of giving the impression that they were intentionally downplaying the violent religious motivation and the vicious sectarian bigotry behind the attacks - and, of course, PJ Media thinks that 'downplaying' those things is exactly what the BBC was up to.

Though I'm less inclined to engage in mind-reading than some, I do think that the BBC treads over-cautiously whenever there's an Islamic motive behind an outrage, and that it does actively tailor its articles to play that angle down. It often leaves its readers groping in semi-darkness as a result, and having to go elsewhere to get the full picture (something, I suspect, most BBC news website readers are unlikely to bother doing).

The BBC would probably regard this as sensitive, responsible reporting - not pushing the 'Islam-is-to-blame' angle before they can be absolutely certain that really there is such an angle to the story, even when much of the rest of the media has been pursuing that angle for hours, and already accepts that there is such an angle. It leaves the BBC looking behind the curve on so many occasions, and looking as if they've got something to hide too. As here.
Posted by Craig at 10:57