The public has spoken 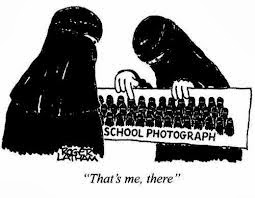 Sunday Morning Live put a question to its audience - "Do Muslim veils deepen divisions?" - and the audience gave 'the wrong answer'.

After the result was given, Samira read out four e-mails on the subject (which she'd presumably had handed to her, as she was too busy presenting the programme to have chosen them herself). They didn't reflect the result of the public vote. Two said 'yes' and two said 'no'.
Posted by Craig at 20:07