The Story of the Jews (Part Three) 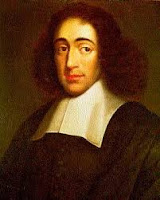 Simon Schama can certainly tell a story; indeed, the third part of his The Story of the Jews seemed to flash by, such was the power of his story-telling.

And it was a big story he had to tell.

"This is the story of an immense leap of faith, made on a promise of equality and toleration. It would carry the Jews of Europe from the certainties of tradition, and from the ghettos enforced by ancient prejudice, and expose them to the opportunities and to the threats of freedom in world transformed by revolution, technology, mass culture and nationalism."

"The consequences would be world-changing, as hopes born on the pages of books died in the flames of hatred and destruction."

I shall retell it here.

This episode followed the story of the Jews of Western Europe from the dawning of the Enlightenment through to its twilight in the late 19th/early 20th Century, ending just as night fell in 1933.

It began in 1656 with the expulsion of the great philosopher Baruch Spinoza from the Jewish community of Amsterdam for his rejection of Jewish tradition - a tradition which the Jews had cherished for the sake of their very survival for over two millennia.

Simon Schama didn't demur from the view that Spinoza was the first philosopher of the Enlightenment and that his heretical, rational, optimistic vision of an all-embracing God/universe uniting all people of all creeds in a single harmony - a vision of toleration - was the wellspring of the Enlightenment, challenging the cherished traditions of the Jews but promising them something tantalising instead:

"It was in the 18th Century that the world of gentile learning and the world of the Jews finally came face to face, finally came to engage with each other. The philosophers of the Enlightenment held that everyone, Jews included, guided by the light of reason, could sweep away the inherited prejudices of centuries. So they made the Jews a special bargain. 'Come out of your mental ghetto. Expose yourself to modern languages, to learning, to science, and then you will become useful members of society. When that happens we will embrace you fully and legally in civil rights and you'll become something new. You'll become a citizen who happens to practise the Jewish faith.' Well, it was a noble idea. For that matter, it still is. The question is, 'Would it work?'" 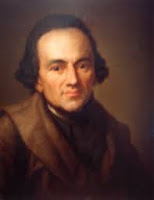 Spinoza's challenge was taken up, just a few generations later, by another Jewish philosopher, Moses Mendelssohn - a man from a poor, provincial background who walked to Berlin and, embodying the Jewish Enlightenment, transformed the relationship between Jews and gentiles forever. Whilst cleaving to Judaism, he embraced science, learned languages galore, became a great friend of the German Enlightenment leader Gotthold Lessing and translated the Hebrew Bible into High German - albeit writing his German in Hebrew letters. For Moses Mendelssohn, that German and Hebrew were kindred spirits. His translation was "the bridge over which generations of Jews would cross from the Jewish world to the German world, from the religious to the secular."

Now there were European thinkers who felt that true 'enlightenment' could only be achieved through conversion to Christianity, and who challenged Moses on this, but Moses Mendelssohn insisted he would always remain a Jew, and expected his enlightened fellow Jews to hold fast to Judaism.

His own children and grandchildren, however, embraced Christianity. His son Abraham, a successful banker, baptised his own children, Felix and Fanny, as Christians - and it was to the composer Felix Mendelssohn that Simon Schama now turned. For Felix, German culture rather than Jewish culture took the driving seat (though Norman Lebrecht believes that he was "in denial" about his Jewishness), and his music went straight to the heart of German (and British) culture.

Music, indeed, was "the royal road for Jews into the heart of German culture" (and beyond), and it was to another Jewish composer - Giacomo Meyerbeer - that Simon turned next. Meyerbeer and his highly successful family did not abandon their Jewish faith as they moved to the centre of sophisticated culture and then, though Giacomo, into dazzling success - a dazzling success, however, that mainly took place in Paris.

That dazzling success brought the first harbinger of the approaching darkness - a not-so-veiled denunciation of Giacomo Meyerbeer [and Mendelssohn] by Richard Wagner. We heard extracts from his notorious 1850 anti-Semitic tract Judaism in Music. Wagner himself pioneered a new, unexpected turn in German culture towards nationalism - Christian, mythic, Teutonic, German nationalism. 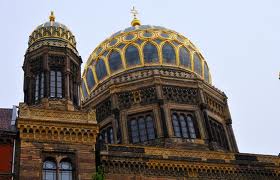 Still, by the 1860s, all still seemed to be going well with the Enlightenment project. Urban Jews lived like anyone else and thrived in places like Berlin, outperforming gentile children in education and becoming captain of the new industries and key figures in the old professions. They were patriotic pioneers of the new Germany, so much so that Prussian chancellor Otto von Bismark was in attendance at the opening (in 1866) of the New Synagogue in Berlin, just before the unification of Germany. "It was a marriage that seemed to be made in heaven between modernising Jewish history and the power of the new Germany," said Simon Schama. "Not a cloud on the horizon. Not yet anyway."

In France, the story was the same. Leading Jewish families, such as the Rothschilds, "were embedded in the project to modernise France" - successful, sophisticated, patriotic.

The Enlightenment project seem to be working.

Then the world turned.

With defeat for France in the Franco-Prussian war, everything changed. "Defeated nations are dangerous nations, prone to paranoia," said Simon Schama. "And that's exactly what happened." French nationalism transmuted into something "narrower", more "strident", more "tribal". A global stock-market crash followed and the tide of anti-Semitism broke. "All the medieval cliches about blood-sucking moneylenders resurfaced", and focused on the figure of "the Jewish banker". ["Now, of course, there were in fact Quaker bankers, Presbyterian bankers, to say nothing of the Catholic bankers to His Holiness, the Pope," Simon noted.] The victims of the crash suspected there had to a controlling group of people "whose loyalty was to each other rather than the nations in which they happened to reside" - and who else could that be but the Jews? Anti-Semitic tracts like Édouard Drumont's La France Juive (Jewish France) stoked this feverish mood up even further.

The most primitive anti-Semitism erupted though with the Dreyfus affair.

"He stepped over the debris of what was not just his own personal career but the debris of a noble dream, the possibility of being a patriotic citizen, Frenchman and a Jew." 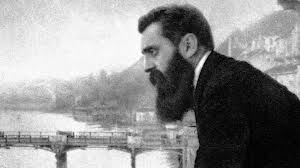 Among the crowds watching Dreyfus's humiliation was Theodore Herzl, a young Viennese journalist -and Jew. That was the moment when "something snapped" with Herzl -  the moment when he realised that the assimilation route "was never going to work out" in Europe, the moment when pessimistic realism confronted the optimism of the Jewish Enlightenment - and found it wanting.

The Enlightenment was meant "to sweep away all the old prejudices". It failed. In Herzl's own Vienna, anti-Semitism was now rampant. The mayor was an anti-Semitic demagogue. So what was to be done?

"He was coming to the conclusion that anti-Semitism could not be cured or defeated. You just had to get out of the way of it. And the problem for the Jews was they were a nation without a home. So in 1895 he wrote his little book, a booklet really, called Der Judenstaat ('The Jewish State'). And this is what he said in it:

"We have sincerely tried everywhere to merge with the nations in which we live, seeking just to preserve the faith, the religion of our fathers, but this has not been allowed to us. It's been in vain that we've tried to enhance the fame of our countries in arts and sciences. It's in vain that we tried to increase its wealth by commerce and trade. We are still in the place where we've lived for centuries, decried as aliens, and often by people who were not even here when the sighs of our fathers have been heard for centuries."

It was at this point that Simon Schama spoke straight to camera, looked each and every one of us in the eye, and said:

"Now Zionism has become a heavily-loaded term - for some people even a tragically loaded term - but not for me.

"I am a Zionist. I'm quite unapologetic about that. Because it comes down to this: Was Herzl, who had a sense of a catastrophic event just around the corner, telling the truth, or wasn't he, about whether it was possible still the live the Enlightenment dream, here in the German world?

"Of course he was.

"With that knowledge, with that sense of the Jews having never had the power of their own national home, how could you not be a Zionist?" 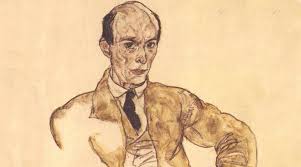 The programme's final Jewish composer, Arnold Schoenberg, living in Herzl's Vienna, wasn't yet prepared to give up the Enlightenment dream though, and confidently spearheaded the cultural revolution of modernism in early 20th Century music. Other cultural revolutions rocked the other arts, with many other Jews leading the way alongside non-Jews.

Schoenberg had, like Felix Mendelssohn, converted to Christianity to "immunise himself" against the effects of anti-Semitism.

It didn't work. When even his friend Kandinsky, the great abstract painter, made strongly anti-Semitic remarks, Schoenberg saw the truth. Even though Kandinsky said that Schoenberg himself was an "exception" from 'the Jewish question', Schoenberg said, "I do not want to be an exception...The events of the last year have forced on me a lesson, and it's one I'll never forget...I am no German. I am no European. Perhaps I'm not even a man, since Europeans seem to prefer even the worst of their race to me. I am a Jew."

The Nazis forced him out. Heading to America, he paused in Paris. There Simon Schama prepared to bring his narrative to a close:

"This story of a great leap of faith began in a synagogue when a Jew was cast out by his own people. It ends in another synagogue, rather differently."

On 24 July 1933, Schoenberg, who had become a Zionist, sought formal readmission to the community of Jews and Judaism. 1933?

"For more than a decade he'd been predicting that if Hitler and the Nazis ever came to power it would not just be the great experiment in cultural modernism that had begun perhaps since Spinoza and Moses Mendelssohn which would be a casualty but the entirety of Jews that would be engulfed in something utterly catastrophic. He knew that what had begun with words would end with terrifying violence. "

"That great dream of being Jewish and a cultural adventurer was about to disappear into the smoke of the crematoria."

"Was it all a delusion then, right from the start? I don't know. I like to think I would have been optimistic with Moses Mendelssohn and realistic with Theodore Herzl. I like to think that the humanity of the Enlightenment idea is not entirely cancelled out by the inhumanity of its incineration. To declare anything else is to declare victory for the murderers. I do know I grieve endlessly. Those here in Berlin, and all over Europe, who innocently imagined they could be Jews and citizens of their own countries and who, to the end, could not imagine the evil that would turn their books and their bodies into ash."