Is the chair of the PAC biased? - live blog (up to a point) 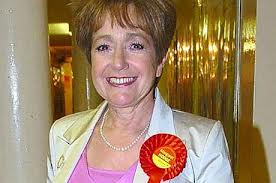 Watching the start of the parliamentary Public Affairs Committee's committee grilling of Mark Thompson, Chris Patten et al, I was struck by PAC chairman (and Labour MP) Margaret Hodge's opening declaration of love for the BBC, and her confidence that that love is shared by us, the public - along with her declaration of interest that her daughter works for the BBC.

Following a tip from Beeboidal at Biased BBC, Ms Hodge's daughter Lizzi Watson has been a producer at Newsnight, so far as I can see, for well over a decade. (See here for 2001 and here for 2013). She was also a producer on BBC News 24 (around 2004), when the one of the BBC's most prominent political reporters, James Landale, called her “our producer, the indefatigable and incomparable Lizzi Watson.”

Margaret Hodge herself was a minister at the Culture, Media and Sport committee from 2007-10 so, unless Lizzi left the BBC for a while, it looks as if she would have been working at the BBC at that time.

Margaret Hodge, who seems to be on the BBC more than most other MPs (oh, for some stats to prove that!), has so far dominated this PAC committee, grilling (ex-BBC) Mark Thompson and Lucy Adams (current BBC HR head, who admitted a mistake over the issue) - "I’m not having any more lies this afternoon’" - but treating Lord Patten (ex-fellow politician, current head of the BBC Trust) with the mildest possible rebuke and a smile. ("PAC chairman bias!?!?!")

Ah, as time goes on Ms Hodge is taking a slightly smaller part, though she remains a dominating figure, and getting praise from the Telegraph for so doing  - and she's going after Mark Thompson - and Miss Adams, to a lesser extent - with a vengeance. ("Oh for goodness sake!", replied an exasperated Miss Adams). 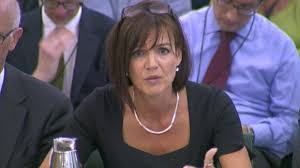 Lord Patten, so far, need not have turned up. He's spoken for about two minutes in the first hour and a half of this committee meeting. Is Margaret Hodge saving her fire for the present head of the BBC Trust for the end?

...well, what happened next it's impossible to say. The BBC News Channel pulled away from the coverage at that point.

Update 17.40 Watching Sky News, Tim Luckhurst, journalism professor at Kent University and former BBC editor, said that the committee failed to get to the bottom of 'who said what to who' (which I'd say is a spot-on assessment) and noted that it took one and a half hours (probably just about the time the BBC's coverage pulled away) for one of the BBC current or former staff to mention the concerns of the licence fee payer, which he said didn't reflect well on the BBC.

Update 17.55 Ross Hawkins on the BBC is saying that Lord Patten has been answering questions at the committee and defending the BBC Trust. We heard Ross's review of his defence, but no clips or counter-points. That that the part of the committee I most wanted to watch live. Thwarted!

Update 18.00 Having been thwarted I thought I'd check out the Telegraph live blog. There's nothing much above the line but the newest comments are suggesting to me that Lord Patten continued to get an easy ride:

20 minutes ago The whole tone changed when Patten spoke. Platitudes and blather. Criminal acts with licence fee money were being paraded before our eyes. And lies and cover ups demonstrated. Lyons like Patten started off with platitudes and was shown up for a liar.
Patten would be too if the MPs stopped sucking to him.
The whole bunch seem like underweight second rate and incompetent. You had a guy there on £280000 per annum who couldn't find an e mail. Says he!
Up til 5 mins ago a good attempt by the MPs. But why are they giving Patten a free ride??

The whole think was quite tense but didn't seem to get anywhere. No one's going anywhere as I result of this I'd say.

Margaret Hodge will have struck many viewers as a feisty interrogator, though what she achieved as a result I really, really can't say.

I'm sick of popcorn now. It was disappointing. The schadenfreude in the build up was so much more fun.


In the end, though, Hodge made it clear that nothing will come of this. This was apparently an excuse to air grievances and make a pretence of slapping a few wrists. She got to scold everyone, so can claim to have been tough and got it about right, but she said that this was all about protecting and saving and cherishing the BBC. It was fun hearing people mention DMI and Lonely Planet, but this was all a charade.

Nobody has to resign, nobody forced to apologize, nothing will happen. Job done.


Update 19.30 The award for the funniest review of today's PAC session goes to Iain Martin at the Daily Telegraph. "It was riveting stuff," he said. "I had no idea what on earth was going on, but my God it was gripping." Quite true.

He captures the modesty of that shrinking violet Chris Patten, "one of Britain's leading peerers over spectables", and the sort of man who "just sits there, eating his oysters, modestly". He also captures how Mark Thompson "said 'um' a lot but with such intensity that it was clear he really meant it".

And as for the lovely Lucy, "The HR director got a very tough time from her colleagues and from everyone else. This is the fate of the HR director down the ages". Indeed it is.

He also pinned down the "highly aggressive" "show trial"-like style of questioning from the show-boating MPs who never managed anywhere near that level of ferocity in the build up to the financial crash. If only that had, if only they had.
Posted by Craig at 17:24