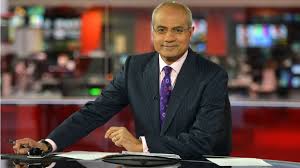 And talking of the BBC News at Six...

The Radio Times 'Feedback' page has been discussing the programme's comparative merits, prompted by a 'Letter of the Week' from a couple of weeks ago (with which I strongly agree):

I would like to raise a banner for ITV News. After comparing "the Six" with the ITV 6.30pm news over many months, I am consistently staggered at how very poor the BBC news service is, and what an extremely high standard ITN offers me nightly.

ITV News usually has more stories, much better covered, with a very high-quality team of reporters, whereas the BBC News too often comprises BBC people interviewing (or speculating with) other studio-based BBC pundits, and far fewer real newshounds filing reports, with interesting pictures, from all over the planet. Sky News and Channel 4 News - which tends to cover fewer stories, but in greater depth - are are hugely better than the BBC. (Jonathan Hewat, Wiltshire)

Gone are the days when the Radio Times 'Letters' page was a largely tepid affair, consisting of praise for BBC programmes and only the mildest of criticism (often instantly rebutted). Since the magazine became completely independent of  the BBC in 2011 sharper strains of criticism have been allowed and even courted.

The Radio Times asked its readers what they made of Mr Hewat's comments and this week they published some of the responses - and they won't make Paul Royall's day. Though some people, in passing, said nice things about George Aligiah, Huw Edwards and BBC4's World News Today, the answer the Radio Times received could basically be summed up as 'Anyone But the BBC'.

I've switched to ITV News. The BBC, especially at lunchtime, uses a soft, conversational delivery but I prefer a factual reading. And I don't like all the BBC's interviewing of their own colleagues. Give the top reporters time to report stories in detail, please. We're not five. (Neil Gough, Anglesey)

The excellent Sky News has much wider, deeper coverage, more professional presentation and is less parochial than the BBC, providing me with more news beyond the UK. (Chris Heane, Northumberland)

I prefer Sky News's foreign coverage. As an example of precision: the Sky News reporter from the Bo Xilai trial told us that information was coming out of the court on a Chinese feed similiar to Twitter, and named it. The BBC reporter merely said it was coming out as tweets. (Georgina Baldoun, Milton Keynes)