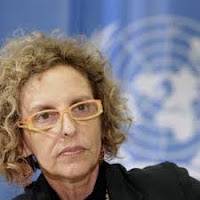 Ms Rolnik has entered the political fray here, denouncing the British government's spare room subsidy/bedroom tax as an attack on people's human rights and has called for it to be axed.


(Her last major invention in British affairs came when she called for a halt to the eviction of the travellers from their illegal encampment at Dale Farm in 2011).


Where the Guardian leads the BBC so often follows, and this morning's Today invited Ms Rolnik in for an interview.

Thankfully, they also did the right thing, balance-wise, by inviting on Conservative minister Grant Shapps for a right of reply.

And reply he most certainly did, strongly, rejecting Ms Rolnik's criticism and denouncing her for having an agenda.

Given Today's coverage, I was also expecting BBC News online to be plastered with the story, but looking within the last hour suggests that hasn't been the case (so far).

There's a new, very short article (a stub, you might call it) discreetly tucked away on their UK page, Conservatives protest to UN over 'bedroom tax' report, which merely reports Grant Shapps's denunciation of Ms Rolnik.

Were there no earlier reports? That's most unlike the BBC, if the Guardian and Today are running with a story!

Sky News, reporting within the last hour, has the fuller report, Axe 'bedroom tax', says UN investigator, though it doesn't place it prominently.

Sky gives both sides of the argument, describes Ms Rolnik as a "former left-wing workers' party politician" and notes that "the criticism is bound to be pounced on by the Labour Party, which opposes the reform and came up with the name 'bedroom tax'".

Here's a video of Raquel Rolnik in action (pace Guido Fawkes). It's quite something.


Will former Guardian editor Ian Katz run with the story on tonight's Newsnight?

Immediate update (before the post was even published): The BBC News website has expanded that stub into a full-length article and it's now the fourth story of their home page. It has arrived!

Like Sky News, it gives both sides of the argument but, unlike Sky, it doesn't describe Ms Rolnik as a "former left-wing workers' party politician", nor does it note that "the criticism is bound to be pounced on by the Labour Party, which opposes the reform and came up with the name 'bedroom tax'".
Posted by Craig at 10:48