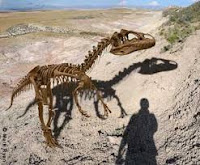 Talking of the BBC's science coverage, one scientific lamp glowing in the dark of Radio 4 is The Life Scientific, hosted by theoretical physicist Jim Al-Khalili (whose name sounds like the word 'alkaline'.)

I listened to the latest edition live last night, but was reminded of it today by a post from Alan at Biased BBC, cleverly entitled A Warming From History. [I wish I'd thought of that. I suppose I could be cheeky and steal it for the title of this post, but as I've now admitted to thinking about doing that it probably wouldn't reflect well on me, would it? So I'd better not then. Note to self: Use it in a few months time.]

Alan notes the way the issue of global warming managed to be shoe-horned into last night's discussion with guest Professor Mike Benton, Professor of Vertebrate Palaeontology (whose name sounds like 'Michael Bentine'), and observes that this is par for the course.

Indeed. You're settling down with a nice cup of Horlicks, listening to a pleasant discussion about Dino, Posh Paws, Godzilla and Barney [as the humanities graduates at the BBC no doubt like to think of dinosaurs], when in crashes some reference to runaway, man-made climate change which will destroy us all, mwahahaha. It's enough to make you want to pour your malted milk drink over the radio.

Still, it was an interesting programme nonetheless, tackling (among many other things) the question of why so many of us get hooked on science when young because of dinosaurs (or astronomy, or both.) Prof Benton suspects that this may originate in children's love of stories about mythical beasts, such as dragons. Children then learn that these dragons actually existed, once upon a time. Their parents can even take them to a museum to see them.

Britain was the birthplace of most of geology and palaeontology, but Western Europe isn't of great interest to geologists. Why? Well, said, Prof Benton, the Ice Ages meant that ice sheets covered most of Northern Europe and concealed or removed older geology. Plus our temperate climate and heavy population means that most of the surface is covered in soil. Geologists, naturally, prefer to see rocks rather than soil. It's places like Russia and China which appeal to Prof Benton, though their rules on exporting make life a little harder for geologists on expedition. 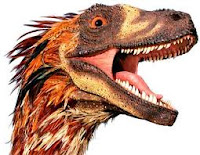 He's presently working on a project which seeks to learn more about the feathers of early birds and dinosaurs, particularly their colour. How can they tell? Because certain pigments in feathers (and human hair) can be preserved. Melanin is one such pigment. It can come in two types, one leading to brown or black colouring, the other to ginger colouring. Both types leave a physical trace within the structure of the feather, thanks to the plastic-like consistency of keratin - the protein found in feathers. To get into the feather melanin has to be contained within captures inside the structure - the black-brown melanin within sausage-shaped capsules and the ginger melanin within spherical captures. So for those colours you can look at the fossils and, if you know where the feathers came from in the body, you can map out the extinct bird or dinosaur's colour pattern. So now you know.

Professor Benton's other main area of interest is mass extinctions. He said that species last on average some 1-2 million years (i.e. not long, in geological terms). There may be 10,000,000 species around today but that's a small fraction of the species that have existed. Species comes and go. A mass extinction is a time when more species than you would expect go extinct at a rapid rate. How rapid? Well, surprisingly, some can occur within just a few years. The most devastating one was the end-Permian mass extinction, some 250 million years ago, before the dinosaurs, when over 90% of species were wiped out. Life recovered, though it could have gone the other way - to the total extinction of life. What caused it? Siberian volcanic eruptions - possibly in two pulses or more  - seem to have been the culprit. Gases - including carbon dioxide - raised the temperature (possibly by 10-12 degrees in some areas) and increased dangerous acid rain, reducing the landscape pretty much to a rocky wasteland. And which point...in came the current global warming question. (It was soon passed over though).

Mike Benton, who worked on the BBC's Walking with Dinosaurs (before they knew about feathers), remains an enthusiast for communicating science - and he certainly communicated it well here.
Posted by Craig at 20:59