"We don't ban any particular word" 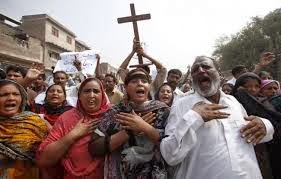 This week's Newswatch began with this commentary by presenter Samira Ahmed:

Last weekend saw an Islamist attack by terrorists, which left scores of people dead. I'm talking about Sunday's suicide bombs in Pakistan, which killed at least 80 people, but you'd be forgiven for thinking I was referring to the four-day siege at a shopping mall in Nairobi. That was much more widely covered in BBC News - a disparity which irked several viewers, including Alan and Pat Pitt who wrote:

'I would be grateful if someone could explain why there was virtually no coverage of the suicide bombing outside a church in Peshawar. The Kenyan attack received, rightly, a great deal of wall-to-wall attention but there were only brief mentions of the Peshawar attack'.

The reporting of the Nairobi siege also attracted a lot of criticism for the language the BBC used to describe the attackers. Charles Louis McMahon spoke for many when he e-mailed:

'The insistence of the BBC to refer to 'militants' implicitly shows some sympathy and support for those people. They are TERRORISTS. Please stop supporting them or mincing words. Please don't use the 'unbiased' excuse. This is not a matter of bias, it is a matter of fact.'

Samira then talked to Mark Hockaday, head of the BBC news room, and began by asking her if there's a BBC policy to call such people 'militants' rather than 'terrorists'.

"No, there isn't," replied Mary Hockaday, firmly. "We don't ban any particular word and nor do we insist on other words".

Now though the BBC have (as both Sue and myself have noted) finally started using the 't word' (albeit patchily) since the Kenyan outrage become too outrageous to downplay, this is something new - and welcome.

Prior to the last week or so, the BBC had in fact stuck pretty rigidly to what - despite Mary Hockaday's assertion - still remains a BBC editorial guideline:

There is no agreed consensus on what constitutes a terrorist or terrorist act. The use of the word will frequently involve a value judgement.

As such, we should not change the word "terrorist" when quoting someone else, but we should avoid using it ourselves.

How does Mary Hockaday's claim tally with that BBC editorial guideline?

Well, of course, it clearly doesn't. She was, I believe, being very disingenuous.

On the Peshawar issue, she insisted the BBC had covered the story "on the day" and that they "revisited" the story on Wednesday.

In other words, the BBC got it about right - the boiler-plate response of all BBC editors on Newswatch.