Nigel Farage and that Hitler moustache: Coincidence or conspiracy? 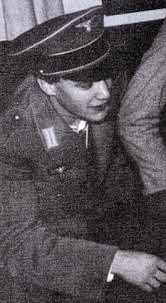 Who's that, dressed up as a Nazi at university?

Is he embarrassed by the photo?

“Of course I’m not embarrassed by it. If I had the choice again, would I do it? No. Is there a difference between being 20 and being 40? Yes.

"I went along with it for a laugh. In retrospect I wouldn’t do it again.”

And nor is Nigel Farage.

Newsnight's former Tory-Basher-in-Chief, Michael Crick, now at Channel 4 News, has obtained a letter [via whom, and for what ulterior motive?] from a period in the UKIP leader's past, which doesn't even come from his university days but from his school days - a letter from 32 years ago, when he was just 17.

Apparently, he said some racist and fascist things at the time.

Michael Crick has also got hold of some comments from some anonymous types from Mr Farage's teenage years, saying that he also sang Hitler Youth songs. Nigel Farage himself says that latter accusation is "silly".

Scroll down though Michael Crick's (smear) article and you'll find this:

Terry Walsh, who was then deputy master at Dulwich (ie. deputy head), says Farage was well known for provoking people, especially left-wing English teachers who had no sense of humour.
The former master of Dulwich David Emms, the man who appointed Farage and received Chloe Deakin's letter, says he has no memory of the meeting or the letter. But he agrees with his former deputy: "It was naughtiness, not racism," Emms told me on Wednesday.

Near the end of his (smear) piece, Michael Crick anticipates the obvious reaction of many readers - what you might call  the 'Ed Balls Defence' - but keeps up the (smear) smear anyway:

Many will argue that it is irrelevant what a teenager did at school more than 30 years ago, but Ukip has a problem showing it is not racist.

I could say in response:

Many will indeed argue that it is irrelevant what a teenager did at school more than 30 years ago, but Labour has a problem showing it is not communist.

After all, as many of you will already know, Peter Mandelson (Peter Mandelson!) was a member of the Young Communist League; Alistair Darling was a Trotskyist; and Alan Johnson considered himself Communist Party of Great Britain. And that's just for starters.

The BBC, of course, decided to follow Michael Crick's lead and took the opportunity provided by Nigel Farage's UKIP conference interviews to ask him about his 'racist' and 'fascist' past.

BBC Breakfast (not available to listen again, as ever) was one such programme.

The bizarre bit came when a pixel on the screen froze during the interview, resulting in this image: 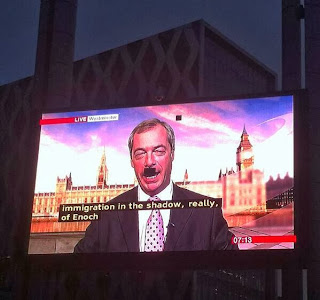 A BBC TV sportscaster then tweeted it to the world: 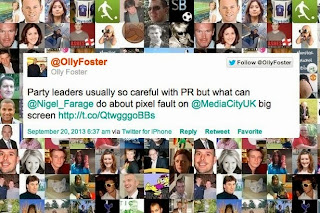 ...for which he duly apologised shortly after:

Olly Foster ‏@OllyFoster10hApologies for my previous tweet. An error of judgement on my behalf.

That inopportune Hitler moustache provoked a feeding frenzy of unfriendly glee from UKIP's opponents, naturally - plus plenty of coverage from the online newspapers.

But it has also provoked a good deal of anger from the BBC's more conspiracy-minded critics.

According to Trending Central, it was no mistake:

Yet another example of the BBC’s hatred of UKIP showing its ugly and biased head.
The BBC is a very adept organisation and no one with any intelligence will see this as a “coincidental mistake”.
There needs to be an investigation into this disgraceful visual attack of Mr Farage. UKIP should consider suing the BBC for defamation.
In politics there is no such thing as a coincidence.

And according to Autonomous Mind,

If anyone believes the BBC had nothing more than an unfortunate and accidental pixelation error, they must believe in the tooth fairy, Bigfoot, the Loch Ness monster and a fat man in a red suit with flying reindeer, who can get down chimneys to leave presents every December…

I'm not overly given to conspiracy theories myself (even about the BBC) and certainly don't believe in either Bigfoot or the Loch Ness monster (though kids, yes, Santa and the Tooth Fairy really do exist!) and remain much more willing to entertain the possibility that this unfortunate pixelation might really be an accident, but it's one heck of a coincidence, isn't it?

Now, if there's one thing my interest in maths tells me it's that coincidences aren't (generally-speaking) anywhere near as unlikely as most people suspect. The chances of a Hitler moustache-shaped pixel freezing somewhere between Nigel Farage's mouth and nose during an interview where he was being probed about his 'Hitler Youth' youth may not be as vanishingly unlikely as you might think...yet it still seems like one heck of a coincidence, doesn't it?

The obvious question here is: Is it even possible though to deliberately engineer a Hitler moustache-shaped pixel to appear precisely where it did during that a live interview? If it's impossible (and just a random glitch), then there's no conspiracy whatsoever. If it's easier than we might think, however, then the conspiracy option re-opens. I haven't a clue about such things, I'm ashamed to say. Have you?

Plus, why go to all the trouble to fleetingly 'paint' a Hitler moustache on Nigel Farage's face when no one would notice it? Except for...erm...a BBC broadcaster who then tweeted it to the world, provoking a mass of interest, including online articles form most of the mainstream UK newspapers.


Update 21/9 The BBC has issued a statement:


"The big screen is owned by MediaCity UK, not the BBC. The fault has been reported to them and they are working to rectify it as soon as possible."

The Independent helpfully reminds its readers of this classic moment from Father Ted: