Laying down a few ground rules 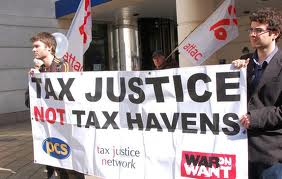 Next Monday's Panorama, Tax, Lies and Videotape, will be going undercover in the City of London, in pursuit of tax avoidance by big companies.

It's to be hoped that their investigation will be fair and factual, and a good test of that will be their choice of 'talking heads'.

There is, of course, absolutely nothing wrong with using anti-tax avoidance campaigners, such as those from the Tax Justice Network, as 'talking heads'. They are a key voice in the debate over tax avoidance.

What would be wrong, however, would be to present them as independent, disinterested tax experts (i.e. as the kind of people viewers can trust not to be spinning them a line).

Unfortunately, Panorama has sinned before in that regard before, as I've blogged previously.

They once used not one but two Tax Justice Network campaigners as 'talking heads' in a single programme, labelling one of them as a "professor of accountancy" and the other as a "financial journalist". Their affiliation to the Tax Justice Network was never mentioned.

Also look out for the name of their campaigning colleague at Private Eye, Richard Brooks.

Time will tell whether this coming Panorama will prove to be a beacon of firm-but-fair investigative journalism, or a piece of campaigning journalism instead.
Posted by Craig at 14:30