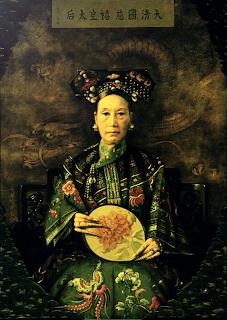 Nothing to do with BBC bias (again), but I've very much enjoyed Radio 4's Book of the Week this week.

Written by Jung Chang (of Wild Swans fame - which I've never read), Empress Dowager Cixi: The Concubine Who Launched Modern China has been a fascinating and thoroughly revisionist take on the extraordinary woman who (unofficially) ruled Imperial China for some fifty years (up until 1908).

Having listened to Jung Chang's highly sympathetic, admiring interpretation (or re-interpretation) of Cixi (pronounced 'Sir' [as in Sir Elton John] and 'shi' [as in the word 'ship', without the letter p on the end]) as a shrewd, well-meaning and modernising ruler (a sort of Chinese Iron Lady), I was taken aback to read (on Wikipedia) the conventional view of the Empress Dowager as a corrupt, reactionary despot who helped destroy her own dynasty (the Manchu Qing dynasty).

I prefer Jung Chang's version.
Posted by Craig at 18:21