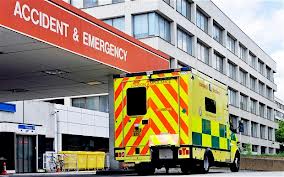 Sky News is leading in a big way today with the hot issue of A&E treatment in NHS hospitals. The BBC is also making it a main story, thanks to an investigation on Radio 5 Live. The two media organisations have very different emphases, however.

Besides a live feed from a medical centre in Nottingham, the Sky News website has two stories this morning.

One is based on its own poll (of 1,106 people carried out by Survation), showing that more that 70% of those questioned believe that patient "who visit A&E while drunk or under the influence of recreational drugs should pay for the treatment they receive" - an issue arising from the startling claim that "at least seven million people a year attend A&E while drunk", thus "placing an enormous strain on health service resources."

The other Sky News story is based on a survey carried out by The Royal College of Nursing (RCN) which found that 89% of nurses say that A&E patients are being put in danger because of the current (and growing) pressure on A&E services.

"More than three quarters cited increased attendance at A&E as the reason for increased pressure, while 74% blamed inappropriate attendance at A&E where patients could have been treated elsewhere.
The survey also found 57% cited a lack of beds for patients coming into A&E, while 54% said there were too few health care staff on duty to cope with demand."

Despite those findings from the nurses' union, the BBC is pursuing the "too few few health care staff on duty to cope with demand angle" (the angle, incidentally, also being pursued by the Labour Party).

The BBC's online report, based on the responses of 101 hospitals trusts to an FOI survey carried out by Radio 5 Live, finds that A&E departments are "understaffed by nearly 10%". There were 1,260 vacant posts overall, and the situation is worst in London.

The same online report does refer to the results of the RCN survey, but only mentions the issue of inappropriate attendances in one paragraph (out of a total of 34 paragraphs).

It always pays to view every news story though the eyes of more than one media organisation these days. That way you can negotiate your way through their contrasting perspectives, and their possible angles.
Posted by Craig at 11:00