It's a bit late today, and I know you've all been waiting with baited breath, so...


This morning's Sunday began with the massacre in Kenya, concentrating on al-Shabab - who are they and what they want - with the BBC's guy there [and rather him than me], Mark Doyle.

Guest presenter Shelagh Fogarty then talked to Labour's Stephen Timms about the Labour Party and faith. He thinks there's something of a left-wing tendency among believers in the UK - unlike in the USA - which could work to Labour's advantage. This follows last week's interview with Lib Dem minister Steve Webb about the Liberal Democrat Party, and faith.  Presumably next week it will be an interview with a Conservative MP about the Conservatives and faith. [Failure to do that would look terrible for them, bias-wise].

There then came a report  about Bishop Edward King Chapel at Ripon College, Oxfordshire - the first religious building to be shortlisted for the RIBA Stirling Prize.  This is what it looks like: 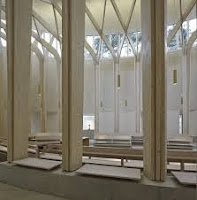 The burqa/niqab debate didn't pan out in the pre-announced way. There was no niqab-wearing Muslim student after all, merely Dr Sara Silvestri from City University, London. She's not in favour of 'banning the niqab'. Maybe they realised that having such a one-sided debate [as the one planned] wasn't a wise move, bias-wise.

Dr Silvestri said the issue of 'Muslim women and the veil' is "not really a big probably", it's "a phantom" people bring up for "ideological" reasons to take attention away from bigger issues. Shelagh echoed that straight back to her, "Almost as though I have this big problem I can't solve, so I'll go to this small thing that isn't really a problem and turn it into one."

That discussion was prefaced by an interview with the BBC's Switzerland correspondent Imogen Foulkes, who I only ever seem to hear when there's a story about 'racist' or 'Islamophobia' in the country. [Does nothing else happen there?] A Swiss canton is holding a ballot on whether to ban the burqa, and local Muslims are feeling aggrieved about it. The supporters of the move are all "right-wing" - if Imogen's account of the story is accurate. We heard from one such aggrieved Muslim, but from no supporters of the move. Imogen Foulkes sounded even less keen on banning the burqa than Sara Silvestri [though Sara isn't the one who's supposed to be an impartial BBC reporter].

There was also a chat with Paddy Agnew of the Irish Times about Pope Francis and his views on the Church, which panned out much as you'd expect, and the programme ended with another discussion [and there have been a few in recent weeks on the programme] about Northern Ireland with Rev Norman Hamilton, a Presbyterian minister in North Belfast, David McKittrick, Ireland Correspondent for the Independent and the Rev Alistair Smyth, Deputy Grand Master of the Grand Orange Lodge of Ireland.

There was another feature, but I'll deal with that separately.
Posted by Craig at 18:30