Here's a curious fact which I thought I'd pass on to you (courtesy of Hugh Aldersey-Williams's Periodic Tales), just for the fun of it.

When the eurocrats designed their euro bank notes and decided on which luminous dyes would be added to help detect counterfeits, it was decreed that compounds of an element discovered in 1901 should be used. That element was the rare earth metal europium.

This was, naturally, kept a secret.

A couple of inquisitive Dutch scientists, however, decided to perform a spectroscopic analysis on a €5 note and discovered the truth, before stopping their research lest it broke the law! They were intrigued by the fact that if you hold one under an ultraviolet light, the yellow stars in the Classical arch start glowing bright red and the Roman bridge (on the back) turns ghostly green and the river below it indigo. 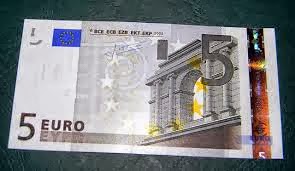 The process behind the decision to slyly infiltrate a chemical element named after the continent of Europe into euro bank notes remains an official secret, but it was obviously a political one - done, probably with a big smile, to celebrate the dawning of a new European age of unity.

Aren't they droll, those Brussels bureaucrats!
Posted by Craig at 11:12