When Hell freezes over 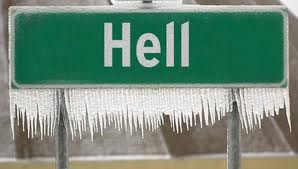 For those of you hoping for the end of the licence fee in the wake of all the recent scandals at the BBC, JP Floru at the Adam Smith Institute applies Public Choice Theory and comes to the conclusion that the licence fee will be tackled "when Hell freezes over".

Here are his workings-out of the costs and benefits for three key stakeholders (with apologies in advance for the skew-whiff formatting):

The politician
Fighting the licence fee and the BBC:
Cost: Very high. Death by BBC silence. Politicians live and breathe by media attention.
Benefit: Low. A large part of the population believes in the BBC.
Standing up for the BBC:
Cost: nil.  Will have political outlets to make his views known. The licence payer pays.
Benefit: Very high. Becoming the Darling of the BBC. Re-elected.

The licence payer
Fighting the licence fee and the BBC:
Cost: very high if one wants to make any impact at all, as virtually everybody has a reason to like the BBC (favourite nature programme, that soap, etc.).
Benefit: £145.50 if the licence fee were to be abolished.
Standing up for the BBC:
Cost: Little—join the club.
Benefit: The BBC continues as before.
Posted by Craig at 21:24