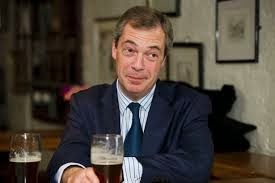 So far Is the BBC biased?'s whirlwind tour of the Today programme's coverage of the 2013 party has covered the Greens, who received only about six minutes' worth of coverage on a single day but got a helpful interview with their party leader, free of interruptions and challenges. We've also covered the Liberal Democrats, who got two and bit day's worth of fairly extensive coverage, a good-natured interview with their party leader and generally positive coverage.

Next up came UKIP, whose coverage was held last weekend (as 'Bloomgate' broke). [Again, sorry for the delay!]

Friday's edition began (before 7 o'clock) with a 4-minute report by BBC political correspondent Robin Brant. We heard Robin asking Nigel Farage if he needed to step back so that the party wouldn't seem like such a one-man band, and from two 'talking heads' from Thurrock. The first, a lady in a video shop, said [on the subject of immigration], "If they want to come over here and work, yes, like if we went over to their country, we'd have to work and support ourselves". The second, a Muslim doctor, was stopped in the street by Robin and asked, "Is he brave or do you think actually Nigel can be a very divisive figure?" [something of a leading question that!], The doctor replied [again on the subject of immigration], "I think it's quite a nuanced argument though. I don't think it's a very black and white issue."

Saturday's edition gave over the prestigious 8.10 spot to a 9-minute interview with Nigel Farage. John Humphrys did the honours.

If you recall the gentle interview with Natalie Bennett of the Greens, where she was allowed to make a positive case for the party, and the good-humoured, non-too-tough interview with Nick Clegg of the Lib Dems, then you will immediately spot the difference between those interviews and this one. Partly that can be explained by the presence of John Humphrys as an interviewer, but both Sarah Montague (who interview the Green leader) and Evan Davis (who interviewed the Lib Dem leader) can be tough interrogators when the mood takes them. 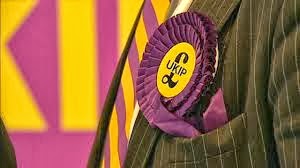 The interview between John Humphrys and Nigel Farage was certainly was considerably tougher than either of the previous interviews with party leaders. [I counted 19 interruptions]. While Evan Davis kept saying that things were going well for Nick Clegg and the Lib Dem conference, John Humphrys prefaced this interview with the words, "It has not going well for UKIP - and that's a bit of an understatement!"

What stood out though was the nature of the questioning. Breaking it down, these were the topics John Humphrys chose to ask Nigel Farage about - and the percentage of the interview devoted to each issue:

Isn't that an extraordinarily negative set of questions?

Over 60% of the entire interview was given over to questions predicated on the assumption that UKIP is a weird party led by a joke figure, a party that a lot people think is racist and sexist.

Now, I suspect the Greens will not be happy that they got a mere 6 minutes or so of coverage on Today while UKIP got some 18 minutes worth of coverage in total, but they can at least console themselves that Sarah Montague's line of questioning didn't attempt to systematically rubbish them!

Is this evidence of anti-UKIP bias on the part of the BBC? Well, I think so.

Reviews of the programme's coverage of the Labour conference (just finished) and the Conservative conference (still to come) will follow. How will those parties fare? How will their party leaders face? Will anyone face as belittling an interview as Nigel Farage?
Posted by Craig at 21:23