Congressmen (not) on BBC America

According to the right-wing website Trending Central the BBC has been caught out over its "pro-Obama bias".

The evidence? A report from the Pew Research Center think tank comparing the coverage of the Syrian Crisis by Al Jazeera America, BBC America, CNN, Fox and MSNBC.

One of the sections in the Pew report examines the use of sources cited by each media organisation. 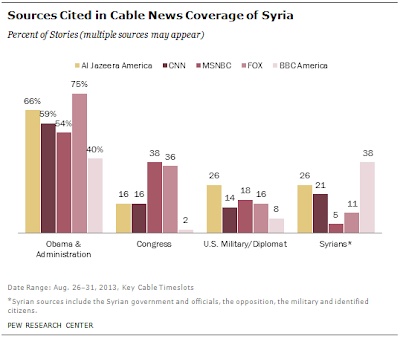 Trending Central notes that all the media outlets relied heavily on Obama administration officials as sources but adds that "the BBC failed to balance its reporting by consulting many representatives of the U.S. House of Congress, the lower house of which is controlled by the Republican Party":

While Fox News, MSNBC, CNN and even Al Jazeera relied upon Obama administration sources for over 50 percent of their coverage on the crisis in Syria, the BBC used just 40 percent. But Fox and MSNBC used 36 and 38 percent Congressional sources, while Al Jazeera and CNN used sources in Congress 16 percent of the time. The BBC came in at just 2 percent on this measure.

Clinching proof of the BBC's pro-Obama, anti-Republican bias?
Posted by Craig at 21:28