Backbone of the BBC 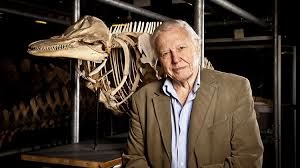 Here's the ever-inspired Clive James on the BBC's best-known silverback:

So successful are the vertebrates that one of them is making huge television programmes at the age of 87. David Attenborough was back yet again with Rise of Animals: Triumph of the Vertebrates (BBC Two). Every vertebrate has a backbone: the device which best expresses “how you and I came to be what we are”.

That statement might apply to Attenborough but I’m bound to say that the spectacle of his undying energy left me with no backbone at all. Dissolved by envy, I just lay there like a puddle of plankton while he climbed rocky hills in China, current scene of all the most interesting new fossils. One of these was the fossil of the very first vertebrate, dating from 525 million years ago, when Bruce Forsyth’s career had barely begun.

Genuinely caring for nature, Attenborough has always been consistent with his message that our beloved Earth is producing too many people, but it should be noted that the message is getting a bit shrill in his old age. He is against food aid for Africa, for example: an opinion that sounds perilously like “let them starve”. Luckily he confines most of these notions to press interviews, and leaves them out of his TV programmes. But when they occasionally creep in, they can sound a bit chilling. He still has a nice smile, though.