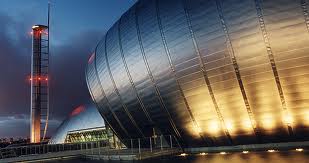 Time for this week's review of Radio 4's Sunday - a special edition from Glasgow.

What drew Edward Stourton to the city? It certainly doesn't appear to have been the lure of a million shops. (Well, it felt like a million to me after I was dragged round most of them recently). Nor was it the city's fascinating mix of old and new architecture (the splendour of Kelvingrove v that thing which looks like a hypodermic needle).

No, it was (a) the Liberal Democrat Conference (well, who could have resisted that?), (b) the installation of a new Catholic archbishop in Scotland to replace the disgraced Cardinal Keith O'Brien, and (c) it being almost one year to the day until the Scottish independence referendum. Being Sunday and Edward Stourton, there was a particularly strong emphasis on (b), Catholic matters.

7.11 Liberal Democrat Conference. The Lib Dem Pensions Minister, Steve Webb, recently declared that "God must be a Liberal", so Edward Stourton interviewed him about that - and about Sarah Teather. [Edward himself, I suspect, believes Him to be a small-'l' liberal, in the U.S. sense of the word]. Mr Webb's basic theological point is that freedom to choose (which he thinks is what his party is really about) is important to human dignity, and that this extraordinary freedom lies at the heart of the gospels. He said that the Lib Dems have a reputation for being a secular party, but he's wants Christians to feel at home in his party.

Edward brought up Mrs Thatcher's use of religion and said that 'the gospel of the poor' was something that backs Labour's position [what, still?]. As for Sarah Teather, she'd written a piece in Steve's book saying it wasn't Christian to be mean to immigrants and benefit scroungers [I paraphrase somewhat], noted Edward. Steve Webb said she was pretty much right about that. 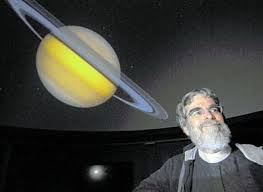 7.15 The Pope's Astronomer. An interview with Brother Guy Consolmagno, papal astronomer, on the question of the relationship between the Vatican and science? 'Why does the pope have an astronomer?', asked Edwards Stourton. Brother Guy said that the official answer is to show that the Catholic Church supports science, but the 'real reason' is that "it's one of those things that makes us human". He himself joined the Peace Corp and went to Africa, where people wanted him to teach them astronomy. Their interest in astronomy was his inspiration.

He explained that the post of papal astronomer arose in the 1500s to help reform the calender and to work out a simple formula that would help the Church get the date of Easter right. Edward raised Galileo (of course), and Brother Guy claimed that much of the story of the Church's ill-treatment of him is a 19th Century myth. [Really?]. Edward also said that the Church was anti-science in late 19th & early 20th centuries. Brother Guy said, no, it opposed things like eugenics but wasn't opposed to science in general. Does the "practical" Pope Francis [as opposed, presumably, to the intellectual Pope Benedict?] approve, Ed wondered. He "understands what we do", replied Brother Guy.

7.21 Deprivation in Scotland. This was a report by Edward Stourton himself on a Church of Scotland project to tackle poverty, in Scotland. As it says on the programme's website: "Passage from India is a charity who are working to combat poverty with support from the Church of Scotland. Edward meets the volunteers in Glasgow to discover how a journey to India inspired them."

The results aren't perhaps what you might be expecting [from a BBC report.] One volunteer said that people in Scotland are "held captive within the benefits system", which results in despair. A couple of women involved in the project then described how it works. Its aim is to build up people's savings by raising funds through things like lunch clubs, ironing, sewing, etc. The target is to boost people's savings to £5000, then encourage them to invest in a business. The two women in question want to open a launderette. Sounds good, doesn't it?

7.26 Chancel repair liability. Returning to a subject discussed last week, Edward read out two e-mails. One described it as an "insidious church tax" and has launched a Facebook campaign against it. A second, a parish councillor, said they wouldn't pursue the matter, except in the case of wealthy landowners, from whom they ask for voluntary contributions. 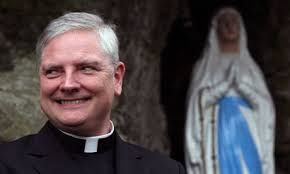 7.28 A new Catholic leader for Scotland. As the blurb puts it, "Edward speaks to the new Archbishop of St Andrews and Edinburgh, Leo Cushley, who will replace the disgraced Cardinal Keith O'Brien, to find out what his vision is for the future of the Catholic Church in Scotland."

Edwards opening question to Mgr Cushley was, "You're returning to a Church in crisis". He denied that, saying just "one or two individuals" were to blame. Edward pressed him on this, and on the allegations of priestly abuse. He replied that it's the Vatican that is responsible for investigating senior Church leaders. His task is to find out personally what happened.
What about an apostolic visitation? "Many people" don't think that's enough, said Edward, and want an independent inquiry. Leo Cushley rejected both ideas as being an "exaggerated" response. Edward pressed him on it.
What about the return of Keith O'Brien to Scotland? After some pressing, he said he thought it was unlikely to return he'd return and that it would be wiser and more helpful if he were to stay away from Scotland.

On the independence referendum, he said the Church has nothing to say.
Edward speculated that a 'yes' vote could put at risk the tradition of faith schools. Mgr Cushley said the Church would fight hard to protect them.

What about bigotry in Scotland? He said he's disturbed by anti-Catholic bigotry but isn't sure how big a problem it is, having only just arrived back in the country.

And what of celibacy, about which Cardinal O'Brien had been mooting a change? Mgr Cushley replied that he's "happy with celibacy".

What about women in the Church? "A lot of people" are interested in that, says Edward. Ed pressed him over the issue of leadership roles for women, laughingly pointing out that they don't want just to arrange flowers. Mgr Cushley said, indeed not but there aren't going to be any women priests.

7.36 Catholic clerical abuse. Returning to last week's story about Fr Patrick Lawson, dismissed from his position in the Scottish Catholic Church for talking about his own abuse at the hands of a priest [and keeping on with the theme that interests Sunday more than most others], Edward talked to George Gardiner, a parishioner who is backing Fr Lawson and who protested against the move by walking out of a mass held by a stand-in priest. 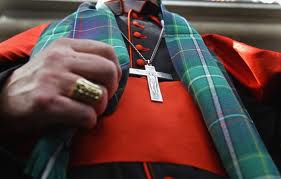 7.38 The State of the Catholic Church in Scotland. Gavin Walker reported. Beginning with the sexual scandal surrounding Keith O'Brien, we heard from the congregation of his former parish who are feeling "a mixture of excitement, trepidation and relief". We also heard from Stephen McGinty of The Scotman, who says that the continuing abuse stories are the main thing facing his replacement. Peter Kearney, a Catholic Church spokesman, said that the Church may not publish everything that it finds out about Keith O'Brien, as some of the information will have to remain private.

What other problems face the Catholic Church? Edinburgh University's Prof. Tom Devine says its internal crisis is the biggest facing it since the Reformation and that the demoralisation caused by Mgr Cushley's predecessor was exacerbated by the fact that several other figures in the Church were also "actors in the process", leading the accusations against their former leader.

Prof. Devine pointed to a significant change in the Scottish Catholic Church's demographics. While it was predominantly poor, Irish  and working class back in the 1950s, by 2001 reached Scottish Catholics had reached "parity" with Protestants, becoming largely middle class. A Catholic Student Union said its membership has risen sharply recently.

7.44 The Independence Referendum. In the wake of the vote, to be held on 18 September 2014, Edward Stourton talked to politics professor John Curtice, politics professor Tom Gallagher and Church of Scotland minister Sally Foster-Fulton about the state of religion in Scotland and the role that it may play in the run up to the referendum. [No open supporters of independence on that panel.]

Is Scotland a religious country?, wondered Edward.  Prof. Curtice said, "no". Even ten years ago 20% went to church, now that's just 12%-13%, and around 70% never attend a church service. So, it's become just as secular as England. 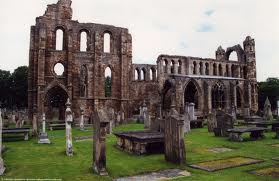 What about the Catholic Church's authority? Prof. Gallagher said it has "not enjoyed success" in persuading politicians for some time. Even before Keith O'Brien, the Church was already "marginalised politically".

Rev. Sally said the Church of Scotland supported the founding of the Scottish parliament but will stay impartial over independence, concentrating on consulting, encouraging and warning over such things as renewable energy, pay day loans, and welfare.

What about sectarianism? Prof. Gallagher said it's a part of Scottish culture, that Scotland is "a distrustful, factional society". Prof. Curtice agreed, up to a point, saying that as far as day to day discourse goes, yes, it's still a problem for Catholics but as far as active discrimination over, say, jobs is concerned, no, it's no longer the problem it was. Rev. Sally agreed that sectarianism is deeply embedded in Scottish society, calling it a "symptom of a very unequal society".
Posted by Craig at 11:23