Craig is on holiday, but I didn’t intend to eviscerate Radio 4's Sunday programme for him, or even listen to it on his behalf. As it happened I did hear it, and what caught my attention was Edward Stourton’s conversation with the BBC’s head of religion and ethics Aaqil Ahmed.

My ears pricked up because there have been quite a few complaints about Islam overload by critics of the BBC and people who are not quite as keen on hearing what Muslims are doing every five minutes as the BBC is.

We also heard an item about the ‘militarisation’ of our education system. Lord Dannatt was pitted against a Quaker called Paul Parker who spoke negatively about putting the military on a pedestal. He probably wasn’t a fan of Help for Heroes, rather like Anjem Choudary, and it did occur to me that now isn’t the best time to start promoting extreme pacifism.

An item about the Empathy Museum offered an easy segue to Aaqul Ahmed’s  project for Ramadan.

Now I don’t want to be nasty, but did Aaquil Ahmed sound like he had the nous to be head of religion and ethics? Or did he sound a bit like someone from W1A? 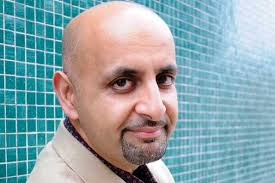 Some of Aaqil’s remarks need translating. When he said ‘some of our audience is a diverse audience’ I  assume he means ‘the Muslims’; I wish he’d call a spade a spade.

He kept saying ‘attempt to try‘ , and sometimes ‘try’ or ‘attempt’ on their own. There’s far too much trying going on. Why does the BBC think it’s their job is to try such things? Does that cover the ‘education’ part of the BBC’s remit?

Aaqil feels he should attempt to do something about our lack of religious literacy. Look. there’s already no lack of attempts to impose (Islamic) religious literacy on us, the airwaves are bombarded with them, but the trouble is no-one even agrees what Islam is. Theresa May just said that thing again on the Marr show. Islam, she insists, is a religion of peace. A peaceful religion. Violence is a distortion of Islam. And don’t you forget it.

This religious literacy malarky could apply to any calendar moment in the year for any other faith, Aaqil assured Edward. It could, but as you know, it usually applies to Islam. There’s going to be even more output than usual to this effect, e.g. weather forecasts that tell us what time the sun officially goes up and down, which you may have noticed.

All this striving to make Islam acceptable to us makes one wonder what the equivalent is in the other direction. Where can we see the BBC trying to market the benefits of Western civilisation to the Muslims?

“I think it’s just to try and normalise something like Ramadan” he explained. However hard you try, Aaquil old chap, you will never normalise Ramadan. It just isn’t biologically normal. Sorry. Apart from that, I know there are millions of Muslims in the UK now, but in the scheme of things, they’re still a minority. The BBC has a dedicated Asian network, kindly use that for your My Ramadan.

As far as many people are concerned, you Muslims can have Your Ramadan. But please don’t think you should impose it on me. Fast if you must.  If it makes you feel more holy, more righteous, more reflective it would be nice. If it made you more tolerant of others or something, so much the better. Good luck.

Here is the transcript.


ES “ It’s 29 minutes to eight. Still to come. Does the suicide bomb attack on a Shi’a mosque  in Kuwait mark the opening of a new sectarian front? (go on, tell me.)
A BBC poll published at the start of Ramadan found that while most people think cultural diversity is a good thing, only half of those surveyed said they clearly understood the Muslim holy month of fasting, which began ten days ago. The BBC also announced a project called “My Ramadan” and I asked Aaqil Ahmed the BBC’s head of religion and ethics what it is.

AAWell the purpose of My Ramadan is two-pronged really. One is actually a recognition that some of our audience is a diverse audience, in this instance they actually talk about religion being important to them so this is an attempt to try and corral as much of our output together around one particular moment an acknowledgement of them as an important audience for us, but also for them to understand that we do do a lot of programming in this territory. And the second  area as well  is that there is an issue of a lack of religious literacy within society and this is an attempt to try and do somethink about that; now we’re using Ramadan in this instance, but it could be any calendar moment in the year for any other faith. And the point is to try and help people understand what’s going on, and what people believe in in this country.


ESHow will that change what people see on their screens and hear on the radio?

AAUltimately, there’ll be more output at one particular moment than there would be normally, so there’ll be a combination of the kind of programmes that we would normally spread out across the year and just some surprising areas, insert some programmes where we wouldn‘t necessarily expect to see something about Ramadan. You may have noticed on lots of the local weather bulletins that we now have the sunrise and the sunset times and link to My Ramadan, and we’re doing some really exciting experiments with social media as well to try and reach out to some of our young audiences

ESYou mentioned social media experiments and there’s one coming up this week called Ramadan in a day, can you tell me what’s that?

AAYes, Ramadan in a day is on the 2nd July, it’s a very exciting experiment it’s on 2am till 10pm, and this is using a variety of different platforms, youTube, Periscope Tumblr, all these kind of like words that are very new to me and the idea is to reach out to a younger audience who is far more tech savvy and may not necessarily be watching some of our programmes or dare I say even listening to some of our radio shows, and it’s an attempt here to, with the Asian network, and with the social media, tap into what people are doing and for it to be interactive as well so that people throughout the day will be telling us what they’re doing, what they’re going to eat, where they’re going, what they normally do, what their favourite moments are and I think it’s just to try and normalise something like Ramadan, you know there are 2.7 - 3 million, whatever the numbers are these days of millions who are fasting during this particular month and I think for them it’s a big moment and we try and mark it in many different ways and this particular way is to mark it for that young audience.

ESObviously the news is dominated by events in the last few days, Given what you say about religious literacy, what do you make of the IS claim to ramadan, the way that they’ve said that it’s a time when attacks are justified?

AAWhen you think about the vast majority in fact virtually everybody apart from these people are celebrating Ramadan, I mean Ramadan is a month of celebration. It may look like to outsiders a terrible month because you’re fasting for so many ours, but actually it’s a very blessed month for all Muslims, so when IS try and turn it into something which is a bloodbath, carnage etcetera it possibly shows their lack of religious literacy in therms of their understanding of what Islam really is. It seems to fly in the face of what the most holiest month for Muslims is supposed to  be about and so for that reason and that reason alone, the need their own version of My Ramadan quite frankly because I think they’re lacking in a bit of religious literacy themselves.