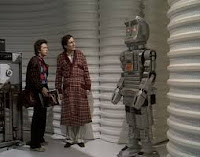 Please can you stop the noise. I'm trying to get some rest.

Even by recent standards, today is proving a particularly depressing news day though, what with Tunisia, France and Kuwait...

Having had an unnerving personal scare this afternoon over events in Tunisia, I feel in the mood for a reflective post. So here goes...

I've admitted before that I often find myself viewing tragedies and atrocities through a peculiar prism - the prism of someone who blogs about BBC bias.

I watch the news, I take on board the horror of the situation, but I've still always got one eye firmly fixed on what might often seem (to people other than me) a relatively trivial side issue: BBC bias.

Today I was forced to think about that habit.

Whether I'm watching a series of fascinating reports on the transformation of a Chinese village into a fully-fledged city within ten years (Carrie Gracie on Newsnight this week), or a report from on board an illegal immigrant ("migrant") vessel in the Med, or Countryfile (Tom Heap's heavily-steered piece this week on travelling gypsies who want to stay put illegally), or listening to a science programme on Radio 4 (usually BBC Inside Science - or, as I like to think of it, Guardian Science), or...God help me!...watching the News Channel and reading the BBC website this afternoon, frantically trying to find out what exactly is happening in Tunisia...some part of my brain is always on high alert for evidence of BBC bias.

Now, I don't think BBC bias is a trivial side issue. Obviously. If I did I wouldn't have spent most of the past six years blogging about it! I think that BBC bias is a serious problem and that, in many areas, its influence is pretty much proven and deeply harmful, and that it needs vigorously resisting.

But I'm growing increasingly queasy at the extent to which I view pretty much everything I watch and hear and read on the BBC through this particular prism of mine.

Even today, when I was fretting myself into a state of near illness about a friend's daughter (on holiday in Tunisia), I found myself simultaneously monitoring the BBC's coverage of the story, with a mind to blogging about it.

At the risk of sounding like a commentator on Radio 4's The Human Zoo though, I'm holding out the hope for myself that I'm not that odd after all.

Most people seem to respond to the news through their own peculiar prisms.

A BBC reporter whose Twitter feed I read today responded to one of the Islamist atrocities by quickly seeking to interpolate himself into a Twitter conversation (also involving, of all people, Mo Ansar), to make the VIP (Very Important Point) that because one of one today's murderous Muslim loons cited 'God' (i.e. Allah) as the justification for his atrocity not all "bleevrs" are "psychos".

Obviously true, but really the VIP to make today? Well, yes. if that's the peculiar prism you see things through.

Applying my own prism then, in what light did the BBC respond to this lunchtime's breaking news?

Well, I did a screengrab (naturally) of the BBC News and Sky News lead articles at around 1.00 pm: 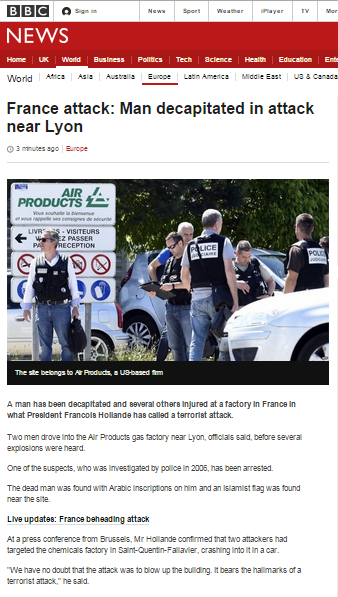 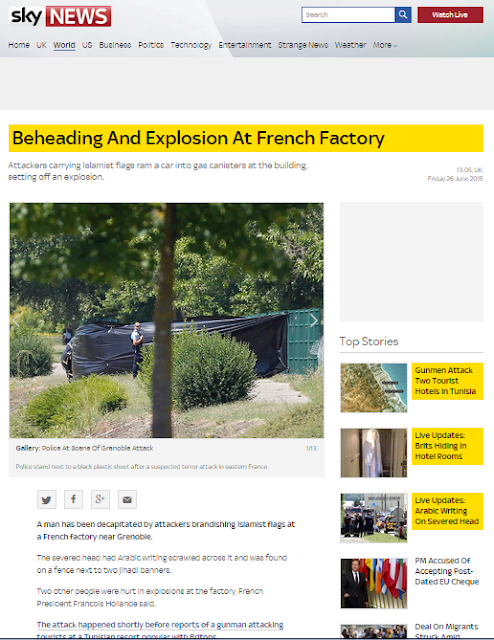 The immediate thing I noticed was that Sky News had the Islamic angle straight away in the blurb below its headline and then in the first paragraph of the main part of its article while the BBC left introducing that angle until its fourth paragraph.

Then I noticed that Sky News was far more explicit about the barbarity of that Islamist attack. Where Sky said, in its second paragraph:


The severed head had Arabic writing scrawled across it and was found on a fence next to two jihadi banners.


The dead man was found with Arabic inscriptions on him and an Islamist flag was found near the site.

There was a clear difference there - and, for a seasoned BBC bias watcher like me - it was the expected difference and strongly suggestive of BBC bias.

Is it wrong to point that out? Obviously not.

Whether it's entirely healthy to be so determined to do so, however, is another matter entirely. It wears me out, it wears me out...

Thankfully, I'm off on holiday now to somewhere exotic (Florence? Sorrento? Amsterdam? Plymouth? You guess!), so I'm giving myself a break - like Melanie Phillips, who always has a summer holiday (starting in Morecambe, ending in Israel apparently)...