You could have knocked me down with a feather this morning at 6:48 am if I hadn’t already been lying down (half asleep) in bed.    The Today programme. 6:38.
I heard a report by Kevin Connolly about the American led negotiations with Iran over their nuclear programme.

Normally the BBC’s reports on this topic come from what might be seen as a pro-Obama perspective, and I don’t doubt that this short item will attract some complaints from the people who claim the BBC is pro Israel.  It was an audio version of this article on the BBC website, but the sound effects Connolly introduced from a civil defence operation in Israel simulating an Iranian attack were emotive in a way that was, for the BBC, unusually empathetic with the Israelis. 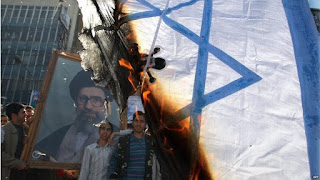 He also managed to include some real sound effects, the boom boom boom that can be heard from the Golan, which emanates from the fighting in next door Syria.

Justin Webb. “22 minutes to seven.  It’s worth pointing out that the American led negotiations going on with Iran to try to work out a final decision on their nuclear programme, those negotiations are coming to a head, world powers offering a trade a relaxation of sanctions in return for a limit to Teheran’s nuclear ambitions, but deep fears in many places on the Middle East that however much it denies it in public Iran is still hell-bent on acquiring a nuclear weapon. The Sunni powers headed by Saudi Arabia are worried, but nowhere does that fear run deeper than in Israel, which thinks it might be a target for a future Iranian nuclear bomb.
Our Middle East correspondent Kevin Connolly has been measuring the mood this week, in Jerusalem.

“As the world powers, negotiating with Iran hope for the best... Israel prepares for the worst.”

“In a nationwide civil defence drill, rocket attacks leave the streets littered with the dead and the dying”

“Schoolchildren are shepherded into air raid shelters as the country braces for further incoming missiles.”

“No-one in Israel doubts, this is about preparing for an attack by Iran, or Hezbullah, its heavily armed Lebanese proxy army”“This was Israeli might that people are convinced that once the Iranians get their hands on a nuclear warhead they would launch it on Israel.”Ronin Bergman writes well-sourced books and articles on Israel’s intelligence community, which devotes most of its time to the Iranian threat.

(?) talks indicate that Israel might try to destroy Iran’s nuclear structure in bombing raids may have receded in recent years, but it’s still part of the picture.”
“Menachim Begin, when he was the Prime Minister back in the early 80s said that Israel would never tolerate and would never accept the fact that a hostile country that calls for its destruction, holds the means to deliver such an annihilation. This is why he ordered the strike on the Tammuz/ Osirak reactor near Baghdad in 1981, and this is why any Israeli Prime Minister would order the bombers to take off against the Iranian nuclear project if he received reliable intelligence that Iran is getting too close to a bomb.”

Benjamin Netanyahu (at the UN)

“So how much enriched uranium do you need for a bomb?”

“When Benjamin Netanyahu appeared at the UN  two and a half years ago he brandished a huge Loony Tunes-style cartoon of a bomb to illustrate Iran’s nuclear progress, Israel’s many enemies sent hypocrisy and pointed to Israel’s own nuclear arsenal, on which its policy is to offer no comment. Israel’s argument is that Iran is different. It’s not just that the revolutionary religious power has talked about destroying Israel, a nuclear Iran would be a more aggressive player in every regional dispute, but Dan Meridor, a former Israeli intelligence minister said the West should not feel that Iran’s nuclear ambitions are unstoppable.”

“You need to stop it. They are serious, and they mean it, and they are smart people, but they understand what the Germans used to call realpolitik. They understand realites; and when there was heavy pressure on their economy by the EU, America and others, you saw a change of face, and maybe a change of behaviour on the Iranian side, so I don’t think we are that weak and I don’t think they are that strong.”

“For Israel this is not just about Iran’s nuclear ambitions. From the Israeli controlled Golan Heights you can hear the sounds of Syria’s civil war....

....where Iran’s own soldiers and its well-funded proxies from Hizballah are fighting. Tamara Cofman Wittes from the  Brookings Foundation  sees  a link between Iran’s nuclear talks and attempts to capitalise on chaos in Syria, Iraq, Lebanon and Yemen by arming and funding Shia militias. She says the hard-liners in Teheran are going to win, whatever the outcome of those negotiations.


“They are either going to be compensated by the regime for a deal giving Iran a freer hand, or they are going to work on their own to undermine a deal, by escalating their activity. And if there is no deal, and Iran is anticipating a broader confrontation with the international community over its nuclear programme, then why would it not want to escalate these other activities as leverage. So I actually think that, form the perspective of the nuclear negotiations, we should expect to see Iran’s destabilising activities scale up, regardless.”

“You can find on the internet “The Last Day”. This graphic Israeli home movie imagining an Iranian nuclear attack. Israelis hope that American led negotiators have done enough to ensure that this remains the stuff of dark fantasy. But they are skeptical.