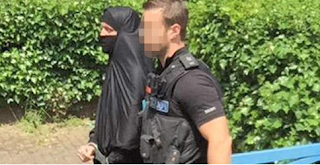 It's some four hours now since the Daily Mirror posted an article headlined:

Within an hour the Independent and Guardian followed, though with less revealing headlines;

Also around three hours ago, the London Evening Standard went with:

Metro came in around two hours ago with:

...around the same time that Sky News ran the headline:

The Daily Mail arrived next with:

And the Daily Express published the story around an hour ago:

Despite being the nation's public service broadcaster, the BBC News website hasn't yet reported this story. (Even the regional section for London and the South East on the BBC website doesn't feature it yet.)

This is a pattern we've become well used to with stories like this.

When it does get round to reporting it (as it will eventually), will the BBC take the Guardian and Independent's route and try to downplay the 'burka'/'niqab' element of the story in the interests of social cohesion (if there's no white far-right connection), lest lots of people start saying the burka should be banned perhaps?
Posted by Craig at 19:43