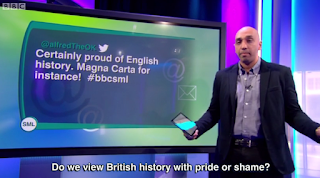 One more thing about this morning's Sunday Morning Live....

The one  regularly enjoyable thing about previous series of the programme was the weekly poll - which almost always 'went the wrong way' for the BBC, very amusingly.

Just one example from last year. Sunday Morning Live asked the question, "Is immigration good for Britain?" The result , announced at the end of the show, was 11% saying 'yes' and 89% saying 'no'. One of the guests nearly fainted.

And it kept on happening:

They've replaced it instead with a man showing us a selection of email, Twitter and Facebook comments after every main section.

On the "Should we be ashamed of British history?" question, Tommy Sandhu (the man in question) read out four of them:

This was how those comments were framed;

Sian Williams: Let's get an update from Tommy about being British and British history. Tommy?
Tommy Sandhu: Thanks Sian, yes, there is a real sense that people want to feel proud but maybe they're struggling to feel that way.