Have I (Not) Got Baroness Trumpington For You 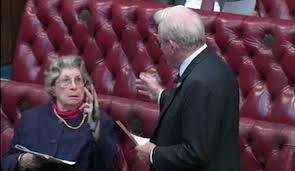 Sorry for not posting much in recent days, but - the blogger's curse - I've not been able to do so.

I have, however, had time to read a book.

Yes, a book. Complete with paper and a hard back cover. And not on Kindle either.

The book in question was Coming Up Trumps by 92-year-old Conservative peer, Baroness Trumpington.

I don't usually buy such books (I tend to stick to science, maths and history books these days), but the reviews were so enthusiastic and the Baroness herself is such a hoot (as she'd doubtless put it!) that I impulse-bought it.

I remembered the Guardian review of it too, and even most Guardian commenters seemed to rally to the noble baroness's banner (beating off their more traditional, PC Guardian-reading compatriots).

And, my goodness, I enjoyed it no end. It was an absolute hoot. And jolly interesting too. What a woman!

There was nothing about the BBC though, except for this - which might interest you:

They wanted me to go on Have I Got News For You when she [Baroness Thatcher] died. I agreed to do it, but when I got there I realised they were going to use the programme to make fun of her. It seemed very clear to me that they were getting a mob up to make silly jokes about a woman who had just died and I wouldn't do it. Well, you can imagine the chaos and the fuss. They got the ex-leader of the Greater London  Council instead, Ken Livingstone. Fine for him to be rude about Mrs Thatcher. Not fine for me. I think it was quite brave of me because I did have to cause a terrible scene, but sometimes you have to stand up for something.

Labels: 'Have I Got News For You', Baroness Trumpington