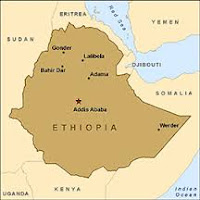 ...blog favourite Hugh Sykes was back on the BBC reporting from Addis Ababa on the "extraordinary" fall in infant mortality (for under-5-year olds) in Ethiopia - a fall of 50% since the turn of the millennium.

This was the kind of report that Today's editor, Jamie Angus, probably had in mind when he envisioned the need for more 'good news stories' from Africa...

...and Paddy O'Connell's introduction (to my surprise) put it down, in part, to "rapid growth and development" in the capital. (Natalie Bennett and Roger Harrabin on Line One, Paddy!)

Hugh's report was uplifting, and Hugh's prose (as ever) was magnificent.

(He didn't return the compliment to me recently, as you may recall!)

I can't comment on the truth of his reporting, but it sounded true - and, as I say, sounded splendid.

Addis Ababa is the old and the new and the rich and the poor, side by side. On the same streets smart clothes and bone-thin beggars in rags that hardly cover them.

And there was much more of that to come...much very moving (and clearly meant to be moving, if I'm being cynical - which, I suppose, I shouldn't be).

Ethiopian prosperity is coming partly thanks to the Chinese (no questions asked)...

Family planning is also helping too (screw you, Catholic Church!)

The government minister agrees with Hugh that it's all happy and great...

...though Hugh regrets (at the very end of his report) Ethiopia's serious democratic failings and thinks, sadly, about what suffragette Sylvia Pankhurst (buried in Addis Ababa) would have made of that.

She'd have been "disappointed", said Hugh, wistfully, as what sounded (to my ears) like a Muslim call to prayer faded into the distance, sadly...
Posted by Craig at 09:35